For the past several months, I have been having a conviction weighing heavy on my heart. I tried ignoring it for as long as I could until one day a conversation came up amongst myself and a few others (both men and women). The conversation was about bicycle shorts and how when men wear them it creates a stronger attraction for a woman to look at a man’s body and may cause them to think lustful thoughts.

God really changed my heart in the midst of that conversation and instead of ignoring my convictions, I figured it was time I start listening to them and take action. I went home later that day and shared the convictions I was having with my wife. Was it possible my wearing bicycle shorts could cause a woman, other than my wife, to think lustfully about my body? I asked my wife her thoughts on the matter when she got home. I appreciated her honesty when she told me, “yeah, when I walk into a place and there are men wearing bicycle shorts everywhere, it’s hard to not look. I try not to, but it’s not easy.”

So, because it is up to me to control women’s lustful ways, I pledge to no longer wear bicycle shorts, bathing suits, or yoga pants. Also, I will refrain from wearing my Spiderman costume in public, because I know that women are staring at my junk and my buttocks and having perverted thoughts about sex with America’s favorite webslinger. I made a vow to my wife and will only wear the Spiderman outfit when I am alone with her.

Because this is a covenant with God and my wife, when in public I will only wear a burka. I know when I am outside, even in a business suit, women see me as a sexual object and are undressing me with their lustful eyes. So I vow to wear as many layers as possible so undressing me with their eyes will just take too much effort. Women will look, but why entice them? I also plan to put on 200 pounds, stop brushing my teeth, and cut my hair into a mullet. My body belongs to God and my wife so I must do what I can to inspire revulsion in women who would look at my twigs and berries in my tight jeans and become aroused.

If Eve had had a burka, I’m sure she would have worn it to keep all the animals in the Garden of Eden from thinking she was “easy.” I am more than my body and by hiding my body under a burka I am protecting women from falling into a pit of overwhelming lust for me and also making God happy.

Obviously, I’m just clowning on fellow Oregonian Veronica Partridge’s viral blog post, Why I Chose to Not Wear Leggings. Her reason is the exact same reason women who live under the religious regime of the Taliban are forced to be covered from head to toe, so as not to illicit lust in men. And look at how that turned out. Those sexually repressed men in Afghanistan are not known for their respect for women. Veronica, it is not women’s job to prevent men from having lustful thoughts, just like it’s not women’s job to stop men from raping women. In the Victorian era there would be riots just over the sight of a woman’s ankle and I’m sure there are men in Afghanistan who get a stiffy from a tiny bit of jiggle under a hijab. If you want to stop enticing men from having lustful thoughts about you, why not get Jesus tattooed on your face? Shit, I bet there some guys who are really into that! Men are going to have lustful thoughts yoga pants or no yoga pants. In this patriarchal culture, men can pretty much find any way to sexualize women. That’s the problem. It’s not leggings that make you a “sexual object.”

I have no doubt your husband appreciates you trying to reduce men jonesing for you. I’m also sure he’s glad other women are NOT doing the same thing. (The male gaze goes unchecked.) And I appreciate you not telling other women to burn their leggings at the stake. Ain’t America great? We’re all free to blog whatever!

As a feminist, I support Ms. Partridge’s right to wear whatever she wants without facing judgement. But it also important to point out that what she is doing is a version of “slut-shaming.” That somehow women are at fault, just by virtue of their clothing choices, in causing bad thoughts (or behavior) in men. I’m sure she is secretly aware that women can be just as lustful as men, but men in biker shorts aren’t seen as creating problems in her Christian marriage. As far as we know.

I want my daughter to live in a world where her clothing choices reflect her sense of self, not a fear of what men might think of her. She will have a right to wear leggings or a hijab or a Brooks Brothers’ suit or a very tight Spiderman costume. She (and Veronica) will be better served by respecting men who can keep their “lustful ways” in check. People (men and women) look. So what? But if you don’t feel safe in your yoga pants, it’s not your fault. And not wearing those things isn’t going to make you any more safe. So let’s deal with that. But I still promise not to wear bicycling shorts again. So 1990s. 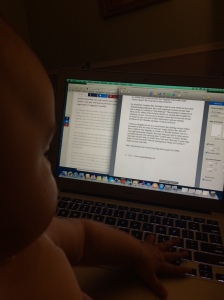 My Ducks! This is what 150 masked students look like. #universityoforegon #letsdothis💪
Damn Good Dad