The baby brain must be an amazing place. Everything is a new sensation and nothing really connects yet. Door? What is this concept? There’s just a magic portal to another dimension. Light? Sometimes I can just see more stuff. Someone controls that? WTF.

They are learning at such a fast rate. We should be envious of how quickly they can put shit together. Cozy just figured out waving. Every parent of a little bean knows that every day it’s some new discovery. I’m still waiting for “Dada,” but until then I’ll settle for the raspberries she blows when she sees me.

At the moment it’s clear that babies are on drugs. It’s gotta a be like Alice In Wonderland times a thousand, with all these new images, sounds, tastes, and feelings. We gave Cozy a taste of Nutella the other day and her eyes about popped out of her head like she just hit a Whip-It.

Neuroscientists don’t believe babies dream. They spend half their sleeping time in REM sleep but don’t have enough experience to fill all that time with dreams, so it’s used to build the brain pathways. That could imply the waking state is more like a dream to them and you know how weird your dreams can get.

What Do Babies Dream About?

I’ve watched Cozy stare at her hand for 10 minutes straight like it was a season finale of House of Cards. I did that on my one big acid experience and my hand turned into a paw, and then a fish fin and then an amoeba. I de-evolved and realized I contained the DNA of the first living thing on earth and the alien life that thing came from. I can only wonder what my daughter was thinking.

One of the most misused words in American culture is “surreal.” It’s used by any dingbat who wants to say something was “awesome.” It’s like when people say, “My head literally exploded.” Wow. That must’ve hurt. Surrealism is an artistic movement that taps in the the subconscious to create dreamlike juxtapositions of images. Just think John Lennon in 1967. He was the walrus (or was it Paul?). That’s all to say that I think Cozy is the girl with kaleidoscope eyes. She must see so much. Our house is filled with art, so it must be an endless trip. 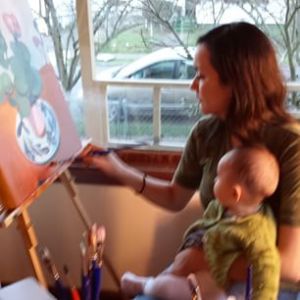 I know when I was a little kid, living below the parent eye-level, I could stare at a crack in the wall and imagine that there was a whole world in there. I used to stare into the blue light on my parents hi-fi and see the rabbit hole to Wonderland. I’ve seen my daughter doing similar things and would love to have a peak into her perceptions. Right now she is staring at the bedroom ceiling like it’s a Cecile B. DeMille epic.

And what is she looking at? Sometimes I think she sees things that we can’t. I’ve caught her looking past my shoulder with great intent, like a scene from The Conjuring. This house is over a hundred years old, so it could be a ghost of God knows what, maybe an early Portland hipster. Hopefully she’s getting good fashion advice. “Oooo, Cozzzyyyy, never wear Crocssssss.”

It must be weird not to be able to communicate clearly with the people around you. I’ve been to countries where I didn’t speak the language and it also felt dreamlike. I was lost in Venice and the only Italian I knew was, “Dov’è la stazione?” Then people would just start babbling some gobbledygook. Goo goo ga joob. What is it like for a baby to want to say, “Dad, your beard is made of ants and I really need a dry diaper.”

There’s a lot lamenting the loss of child-like wonder as we get older. Instead of imagining what could be, we just ruminate on our own past. When we’re young, everything is ahead of us, all that potential. What do you want to be? Finally we get to a point where nothing is ahead of us and it’s all refection. What could I have been?

But a lot of that wonder is pure hallucination. I know that when I was 12, I saw Bigfoot on a camping trip in Colorado. Know it! When I was 7 and playing in the woods by myself (ah, those were the days), I knew there was a 300-foot tall bear that lived in those woods. Knew it! And when I was 3, I was convinced that cartoon characters would appear on my bedroom wall to entertain me. OK, that was 1967 so somebody might have spiked my juice.

I love that Cozy goes off to her own private Idaho on a regular basis. I want to be able to keep that part of her brain flowing while preparing her to handle some of harsh realities of the world. Can you be 1967 AND 1968? Life is but a dream.

One thought on “Babies are on acid.”