Cozy has made it to 14 months. I was a little nervous about the 13 month spread because of the Stevie Wonder thing. (“Thirteen month old baby, broke the looking glass…”) So we’re at a year and two months and still no clear gendered behavior. I’m going to knock on wood before she walks in here with a picture of Barbie that she has uploaded on my smartphone. She is still just a person. Hooray!

It’s funny how we think about gender in terms of opposites; that there are opposite sexes. A local rock club posted a noticed that “Opposite genders” were not allowed in their bathrooms. (The note came down after some trans-sensitive folks had a word with the owner.) Genders have no opposite and men and women have more in common than we acknowledge. It’s not like boys walk on their feet and girls walk on their hands. This is not Dr. Seus-land.

But the gender binary is a powerful idea. We do construct the idea of gender in this culture, at this time, in terms of opposites (although less so than previous generations). Men are active and strong while women are passive and weak. Men are stoic and women are emotional. Men are earners and women are spenders, and on and on. Of course there are a zillion examples of how this is not true and the core of the liberal feminist agenda is that women can do anything men can do, including fight wars. (Radical feminists have a different take on that, as discussed in the post on Second Wave.) But patriarchy establishes that men assert the desired quality and then the opposite is relegated to the feminine. Men are brave heroes and women are crazy bitches.

One of the characteristics of this gender dichotomy is the idea of autonomy. Men are supposed to be free to come and go. High plains drifter. Papa was a rolling stone. The world is there for men to explore, block by block, continent by continent. Chart your own course, dude. Make your own dreams, homeboy. Hit the road, Jack Kerouac. In contrast females have a thick rule book to play by and are not supposed to be autonomous. They are supposed to be dependent little princesses, sitting around in their parents’ castle, singing, “Someday My Prince Will Come.” In my mom’s generation, women typically said yes to the first man that proposed to them because it was the only way to get out of the parents’ house. This was long before Sex and the City.

Of course, any single mom now would laugh at this simple dichotomy but there are still vestiges of it around. When I was in college, there were plenty of women who would joke that their major was “pre-wed,” and they were in college to get their “Mrs. Degree.” There’s a Bible college south of Portland where the female students are still fond of saying, “Ring by spring or your money back.” For those women I would  require a viewing Mona Lisa Smile, the 2003 Julia Roberts movie. If your life is dedicated to finding a husband to take care of you, you are in for a sad awakening at around age 29.

I want Cozy to be autonomous. I want her to roam free and drive her own car, not sit in the passenger seat (or the backseat with the other guy’s wife). She roams the house and has only fallen down the stairs once. (Please don’t tell anybody.) Of course, as a parent I keep a close eye on her, but if she wants to play with her blocks or look at books, she can. We are trying to instill a sense of her own independence while keeping her safe from falling down a well. (Little girls falling down wells was a big fad in the late 1980s.)

Baby’s are generally the opposite of autonomous. If she’s headed for the street, I’m going to pick her up. If she’s munching on spilled coffee grounds, I’m washing her mouth out. If she’s trying to turn on the TV and it’s not Sesame Street time, I’m going to shut it off. And I am always taking something out of her hands. Sorry, kid, grown ups are in charge. But at the same time, she has to discover her own freedom. She can be a rolling stone as long as the door to the basement is closed.

Andrea and I went to go see Madonna’s big Rebel Heart concert last week. At 57, she is a great example of what a woman can do when left to her own devices (and a dumptruck full of Botox). Madonna couldn’t have happened in the 1950s. She needed the feminists of the 1960s and 1970s saying that a material girl has the right to her own life and dreams, so go for it. Be like Susan in Desperately Seeking Susan, not Roberta. Or be like Roberta in the end of that movie. But get an education so you don’t have to keep all your belongings in a Port Authority locker in a bus station. (OK, there’s been way too much Madonna in this house since the concert.)

Parenting is such a balancing act. The challenge of raising an independent child who doesn’t get mowed down by a drunk driver at a parade. It seems like our society is always trying to strike a balance between our freedom and our safety. On top of that, I don’t want Cozy to think she is some princess who’s singular dream is the arrival of Mr. Right to think for her once she leaves the nest. It’s nice to see the rejection of the princess thing by so many parents and girls. We don’t live in fucking medieval Europe. Unless she’s the mother of dragons, we are looking forward, babe. A rolling stone with roots, that’s what we want, not Repunzel. Besides, Cozy has already decided she is going to be a soccer star or a contractor. She can hire Prince Charming to manage her payroll. 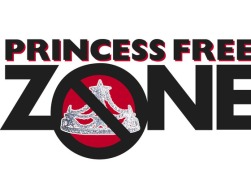