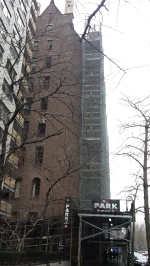 I’m sitting in a bar on West 72nd Street in Manhattan. This is John Lennon’s block. John Lennon, the househusband and patron saint of this blog. I often come here on trips to New York, a solemn pilgrimage to consecrated pavement, blessed by his blood, thinking I will see him and his death will all have been a bad dream, conjured up by Rosemary’s devil-eyed baby. I walked the block, past the Dakota and thought about how many times he did the same. I’m sure it’s changed a bit since 1980. The Starbucks and the tour busses (“And to your left you’ll see the spot where Beatle John Lennon was murdered.”) weren’t there during the last days of the Carter years. And when it happened we thought our love affair with guns was finally done. On this Saturday the Dakota is draped in sheets and scaffolding. At first I thought it was a Yoko Ono performance piece as she still lives in the Victorian castle overlooking Central Park. Turns out the old house is just being cleaned.

But most of this short trip has been spent in Greenwich Village (although I did hike up to the East Village this morning for some perfect pirogues at Veselka Café that happily took their time melting on my tongue). As long as John has been in my life, Patti Smith has been there almost as long. At least since I read about her in rock magazines in my teenage bedroom in 1976 Stone Mountain, Georgia; the wild woman, chanting, “Go Rimbaud!”

The dirty, nasty world of CBGB’s on the Bowery is where I wanted to be, not in my Ted Nugent-loving southern suburbia, draped in pink and blue Laura Ashley curtains. At age 14, I got the Easter album after hearing “Because the Night” on the radio and tried to dissect the poetry imbedded in what was then considered “punk rock.” High on rebellion. Words can carry you. Maybe I can do that, my pimply brain thought. Maybe I can write a line that will take on a life of its own.

After my piano-playing mother, Patti was my first exposure to the energy of the goddess artist. There was a raw feminist power to her, unrestrained by gendered expectations. Her hairy armpits were mocked on Saturday Night Live when Gilda Radner did her “Candy Slice” character. It was all wild abandon to boy trapped in the suffocating Bible Belt. I’d sit in front of my stereo speakers like Hendrix kneeling in front of his burning guitar. Give me more, I’d beg.

The first time I saw her play live, I was in a state of ecstasy. It was at the Crystal Ballroom in Portland in 2001 and when she played “Gloria,” I ripped my shirt off thinking I was being ushered into a Roman orgy. There’s track from that show on her 2002 Land album. She’s reading from Ginsberg’s Howl and you can hear me screaming like a banshee. The only drug I was on was transcendence. And now my artist wife is deep under her spell. Our own Frida Kahlo with a rock band and a return to Portland on Andrea’s birthday.

After seeing her last Wednesday night with Andrea, performing 1975’s Horses front to back (including the prose-rhapsody of  “Birdland.” Oh, how long I’ve waited for you!), I decided to take her new book, M Train, with me to New York, where I would be interviewing at a wonderful university. It’s a brilliant free floating tome about travels and not being able to write this particular book. It’s like her version of a Seinfeld episode. By the time I landed, I had the first hundred pages dancing barefoot in my head.

As it turns out, the book unfolds around the world but mostly in Greenwich Village, near where I was staying in Chinatown. Much of it begins at Café ‘Ino on 21 Bedford Street, just past 6th Avenue. I must go there, I thought on the plane, and have black coffee and toast at her table! Of course, in rapidly transforming New York City, Café ‘Ino is gone gone. It closed in 2013 and now is a lovely Italian bistro called Cotenna, where I had a sumptuous penne al fungi and a glass of red wine and imagined her sitting by the window, scribbling in her notebook.

The other Patti spot is Caffé Dante, around the corner on MacDougal. They didn’t open until noon and it was 11 am on Friday, so I walked up the block to Caffe Reggio, an old favorite of mine. I was traveling light, just my laptop bag with the Mac, M Train, a few pens, the latest issue of Beatlefan and the new Village Voice with a caricature of Donald Trump as a fascist demagogue on the cover.

I found a seat surrounded by fellow literary travelers all enclosed in the café’s red womb-like walls, waiting to birth some brilliant thought or first line. A young guy next to me was reading Kerouac, an older fellow (who I’m sure I’ve seen there before) was reading Lacan: A True Genius and kept putting the book down with a “Holy psychoanalysis!” look on his face. I had my copy of M Train and a cappuccino, keeping one eye out the window in case Ms. Smith walked by. But my singular mission was to spend some time in her world through the pages of her book.

As my year of writing winds down it’s time to put myself back on the market. Parenthood demands a stable income, but my mind is still floating in the ether. A winning Powerball ticket bought on St. Marks aside, I’d really like Cozette to know her father as more than the guy sitting on the couch writing while drinking endless cups of coffee. So on MacDougal I developed a fantasy about running into Patti before my interview with the provost. I’d grab a seat next her at Caffé Dante and mention our prior meeting at Powell’s Books in Portland when I showed her my Cobain homage in my book of poetry to her Dylan homage in her book of poetry.

“So what are you doing here in New York?” She’d ask.

“Hoping to land a job. I was a criminologist at a university in Portland for twenty years…”

Her attention would zip up a few notches. As it turns out, Patti is obsessed with crime shows on TV.  I remember when I first heard her mention this, at a concert at the Crystal Ballroom, I thought, What? Patti Smith watches TV??? I thought she only read poems by doomed bohemians. I watch TV! I wonder what else we have in common. Does she buy wine based on what the label looks like? Because I totally do that!

I’d continue with the story of how I was forced into a position to choose between love or my job and I chose love without hesitation, resigning my tenured post to become a stay-at-home-dad.

“That’s horrible,” she’d say. “I’ve heard professors can be targets like that.”

“It turned out for the best. I’ve had time to write and be with my daughter. But I’m ready to go back to work. I’ve got a meeting with a university here at 2 o’clock. Do you think you could give me a special blessing? It would mean a lot to me and my family.”

“Well, I’m not Pope Francis,” she’d say, “but okay.”  Then she’d make the mark of the cross on my forehead like she had holy water on her fingers instead of coffee and I’d be Joan of Arc, ready for battle. And that’s how our long friendship would begin.

A friend on Facebook reminded me that Patti was performing in Los Angeles the next night so I wasn’t likely to see her strolling down MacDougal, eating a falafel from Mamoun’s. Still, I felt her there, standing on the corner of 6th Avenue and Houston, sending me on my way as I mis-sang the lyrics to “Kimberly.” Give me your starry eyes, baby.

I don’t want to mention the name of the university for fear of jinxing my chances (or the greater fear that evil conspirators in Portland will catch wind and work their black magic on it), but the interview went really well and the university administrator, as providence would have it, was a Patti Smith fan. On top of that, the AirBNB where I stayed in Chinatown had an autographed copy of Horses outside my room. All the stars of the northeastern cross were aligned.

After the interview and lunch where Café ‘Ino once was, I went to Caffé Dante for coffee and a dessert that I felt I’d earned. I needed some writing time and got a few scenes for the new book down, including one deep discussion between the two main characters about farting in airport men’s rooms. (I’m not pretending to be Fredrico Garcia Lorca here.) I tried my rusty Italian on the waiter and he told me in slightly less rusty English how expensive this city had become but that there are still small places for artists.

New York seems warm for early January. Yesterday people tossed their Christmas Trees on to the sidewalks to be sent God knows where, but Christmas decorations still hang above Columbus Avenue and in Little Italy, near “my” flat. This morning at Veselka a group of young Russian immigrants came in and sang Christmas carols. The Russian Orthodox calendar must be different than ours, I half remembered. Maybe this would be a magical place to raise a child, I thought. The carolers wore wonderful costumes including a Grim Reaper. Joyousness!

My fantasy of New York has always been the dirty boulevard of Lou Reed songs. Trash and Vaudeville. But now as the parent I have to reimagine that fantasy. It’s horribly expensive and the school situation seems impossible, people tell me. And what if I lost Cozy on the A Train or in the Museum of Modern Art? (Although there are worse fates for a child.) But then again, she could grow up in the absolute center of the world and sit in cafés on Saturdays in the Village, maybe bumping into Patti Smith. Or John Lennon.

Addendum: I finished M Train on the flight from Newark to Seattle. I was laughing and then crying and then I just wanted to write. Read this book, but be sure to find a good café in which to do it.

Afterword: Well, the job ended up going to some kid fresh out of Harvard. I guess I could have used the blessing from Mother Patti after all.

Last day of class in the LLC! I’ll be back on campus in January! Go Ducks! @uoregon #sociologyprofessor #schoolsout
Damn Good Dad