Cozy and I were at the zoo this week and she was really excited to see the fruit bats. To get to the Oregon Zoo’s bat cave we had to pass the giraffe enclosure. She was so focused on the bats she could have cared less about the giant giraffes. “But Cozy, there are two huge giraffes right there! Let’s stop and look at them.”  She looked back at me, like “meh. I’ve seen those giraffes before.”

Her blasé attitude about giraffes is how America feels about mass shootings. So what? 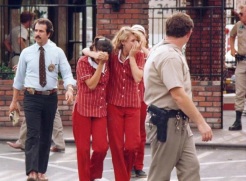 When I went to school in the UK in 1980s, people would often be amazed that, as an American, I didn’t live in constant fear of being killed by a mad gunman. “Aren’t you terrified you’ll be in a McDonalds and some guy will walk in and just start shooting?” This is the world’s picture of the United States. It’s a shoot out at OK Corral every day as boys and men unload their sacred weapons into soft targets at schools, synagogues, and college bars. “Meh,” we say, as the bodies stack up. Some of the victims of last night’s shooting in Thousand Oaks were also at last year’s shooting on the Las Vegas strip. How many mass shootings will you survive? Or not?

It’s more than disgusting that this is the hallmark of American culture. We are a nation of boys and men who see homicidal violence as an appropriate way of expressing pain and anger. Most of these boys and men are suicidal so the “good guy with a gun” myth only fits into their plan. Another day, another mass shooting in America. I have written about this too many times and the need to focus on the masculinity-gun violence connection. There will be so many more shootings, so many more grieving family members on TV. And then the next shooting will happen. This is America.

Pioneering sociologist Georg Simmel (1858-1918) foresaw the “Meh Effect” in his 1903 essay, The Metropolis and Mental Life. He wrote of a relatively new phenomenon he called the blasé attitude. Life in the city had so much stimuli that we become overwhelmed and just tune everything out as sort of a coping mechanism. I remember the first time I saw a homeless person laying on a sidewalk, I jumped out of friend’s car to help. I thought they were having a medical emergency. My friend grabbed me and told me, “That’s just a homeless person. You see it all the time in the city.” Meh.

Nothing is shocking anymore. We see so much carnage from random gun violence in this country, it’s barely worth looking up from our phones. It must be how kids in Aleppo respond when they hear another bomb drop on their neighborhood. We are immune. Until it happens to us. Until the deep trauma has dropped on our doorstep.

Because I do this work, I pay attention to the exit signs. Especially when I am out with my kid. When Cozy and I were wandering around Times Square last month, I made mental notes about where to go if a bomb went off or some guy just opened fire on the crowds. I did not, however, make a plan of how to respond if my daughter had been killed and perhaps I should. 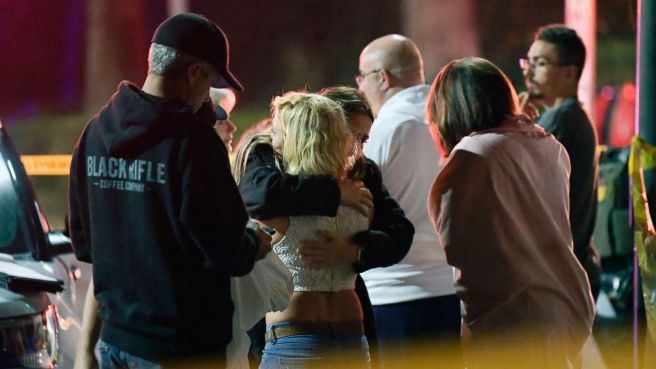 6 thoughts on “At which mass shooting will your loved ones be killed?”