It’s always hard to figure out what the hell is going on in China. It was clear at the 2008 Olympics there was a China the government wanted the world to see and then there was whatever existed behind the curtain. Even with the rush of western money (not only are Walmart products made in China there are over 100 Walmart stores in China), it’s still hard to get a clear picture here.

This is especially true of gender roles in China.

There’s been several stories about how great the new Chinese economy is for women, smashing the glass ceiling. A 2013 survey of over 6000 Chinese companies found that 51% of senior management was female. Stories about China having more female billionaires than anyplace on Earth. I doubt that was what communist leader Mao meant when he said, “Women hold up half of the sky.” But then again, China is a long way from Marx’s vision of a communist utopia.

When westerners visit big cities, they do report seeing large numbers of women in the workforce. (According to Chinese government data, about 74% of women work, the same as the United States). The problem is China is still mostly an agrarian society and women working on a farm are probably not as “empowered” as woman working at a Walmart. (That’s such a sad statement.)

Chinese culture is one of the oldest continuous cultures on earth (after India, if I remember my freshman World History class accurately), so you could say gender roles are heavily entrenched. There is is still favoritism of boys over girls and husbands over wives, but despite Conservative claims about Chinese-Americans aborting female babies there is evidence that Chinese female fetuses are not aborted at a higher rate here or in China. Chinese maternal health law prohibits ultrasounds being used to establish the sex of the fetus to prevent female infanticide. Doesn’t mean it doesn’t happen.

The emerging issue seems to be how those ancient gender roles are re-emerging in the growing cities. There is a new shaming of single women who have not gotten married. They are referred to as sheng nü, or “leftover women.” There is a new book out by a young researcher named Leta Hong Fincher called Leftover Women: The Resurgence of Gender Inequality in China that explores this trend. 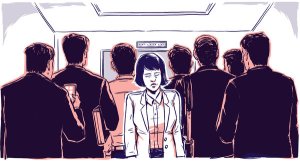 The themes remind me of the work of Susan Faludi in her works Backlash and The Terror Dream. We can can’t assume we are on a straight path to gender equality. It’s more like a pendulum, that women’s advancement brings with it a push back to the “good old days” of oppression. Just check out the latest propaganda from ISIS or the 700 Club.

I’ve told my students to keep an eye on China. The American Century is over. World Systems Theory predicts that China will be the next global top dog. The culture (including ideas about gender) that we’ve been exporting to the world for the last 100 years could be replaced by the Chinese culture we import.

This is the world my daughter will grow up in. Will concern over leftover women replace concern over thigh gaps here? And how are the women and girls of China advancing (or not) in this global economy? I think Fincher’s book will be a good place to start.

I’m interested on what people who know more than I about contemporary gender roles in China. Please feel free to comment.

The following books were mentioned in this post. You can buy them from Powell’s through this blog. Just click on the covers below to go to the site.

One thought on “Gender Notes: A Short Note About China”