Happy new year! You probably figured I’d be writing about the militia standoff in Burns, Oregon today. Well, some things are more important than domestic terrorists trying to bring down the U.S. government one federally owned gift-shop at a time. Cozy had to go to the hospital last night!!!

If you’re not from Portland you might not know that the El Niño god gifted us with a beautiful winter storm yesterday. It was Cozy’s first chance to really play in the snow and she loved it. Wrapped in my scarf from 1976 (notice the bicentennial colors – Patriot!), she was a joyful snow bunny. We had to drag her back into the house. She could have walked around in it all day. It was a magical Sunday and we were careful not to let her slip and dislocate an elbow.

Later the snow turned to freezing rain and the whole city became a skating rink. So I walked up to the Thai restaurant to get some dinner. (The pineapple fried rice at Thai Noon is worth taking over a federal building for.) I had just placed the order when my phone rang and it was Andrea in a panic.

“We have to take Cozy to the emergency room!”

I felt like I’m about to vomit at this point. “What happened?” I asked again.

“I was just playing with her, swinging around and she can’t move her arm!”

Okay, first some relief. She didn’t guzzle any Draino or fall out of the window on to the frozen ground. Dislocated elbows. These things happen. So I hot-footed it home on the cold ice to figure out how bad it was. I could see Andrea in the window as I got close to the house. She had baby wrapped up in a blanket and there was no screaming. Maybe it was a false alarm and I could go back and get the food.

Cozy seemed a little dazed and when I tried to get her to lift her left arm it just hung there, limp. My heart sunk and I feared the worst. How can my daughter get that softball scholarship with a bum arm? When an MC says, “Raise your hands in the air,” how is she going to feel with just one arm up? And will this ruin her chances to win American Ninja Warrior and fund dad’s luxury retirement home? So we had to get straight to the ER and see if George Clooney could save our child from a lopsided life. (A special shout-out to all my lopsided friends. As a stroke survivor, you complete me.)

I should say that I once had my arm pulled out of its socket. I was 18 and living in London. I went to see the Lords of the New Church play in a hotel ballroom in Hammersmith and was slam dancing when I went one way and my right arm went the other. You can’t imagine the pain. This bloke in the pit with me said, “Hold on mate, I’m a paramedic! Let me fix that for you!” And in the middle of the crowd he shoved my arm back in, more pain and then just fine. Back to slam dancing. Punk rock!

So I know my 16-month-old girl was in pain but the fix was just a quick drive away. The problem was that by that point the roads were iced over so bad, we might all die on the way. And there was absolutely no way we could make it down the Alameda Ridge to get to Providence Hospital, where we are fully insured. So we decided to take a slow and steady drive to Legacy Emmanuel Hospital (insurance covers emergencies) and hope we didn’t get t-boned by a zamboni (any other night that would be fine). Andrea sat in the back, repeatedly apologizing to our daughter and me. I was secretly thankful that I wasn’t the one who had done this. It so easily could’ve been me. 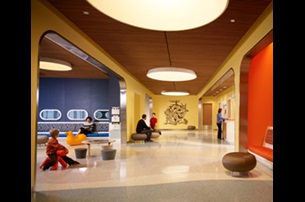 Legacy Emmanuel has a new space-age Children’s Emergency wing (think the 1970’s version of Tomorrowland. Portland is that post-modern) and the folks there were amazing. After I slid into the parking lot, we bundled baby up for the next step of the adventure. Would they have to operate? I expected to find a waiting room filled with kids who slipped on the ice or had their tongues grafted to frozen poles, but it was empty and Cozy went right in.

The condition is called “Nursemaid’s Elbow” or “Babysitter’s Elbow” (yeah, Dad’s not getting the blame) and it’s as common as macaroni on the floor. (Radial head subluxation for you medical students.) The elbow ligaments of kids under 3 are really spongey and it’s not difficult for a tug on the arm to pop the elbow out of it’s groove. Sort of like a slot car going off the track. You just have to put it back on. The nurse said it happened to her brother while eating Cheerios, five times. (Maybe those weren’t Cheerios.) So the doctor would work her magic and by kindergarten we wouldn’t really have to think about it. 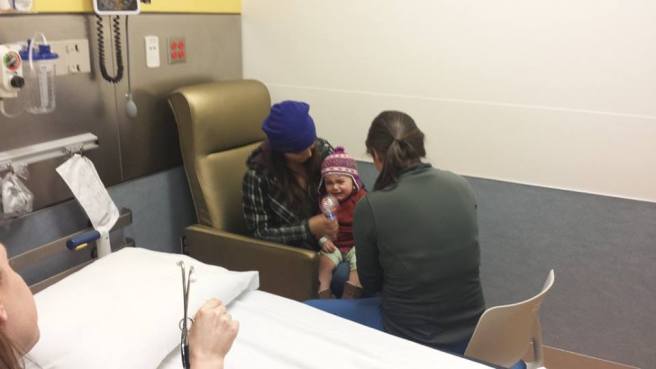 The nurse worked at distracting Cozy with colored lights. (Note: Cozy loves colored lights. Plan trip to Vegas soon.) The doctor was very gentle with her and let us know there would be a little bit of pain and then she should be good. Andrea held Cozy, who seemed confused by all the fuss, and the doctor gave her forearm and little tug and twist. Some screams and then a look that said, “Holy shit, that feels better,” and in two minutes she was lifting things with her left arm and acting like it never happened. Amputation averted.

But what an emotional roller coaster. We both felt horrible that this happened to our precious child. As I’ve written about in my numerous “Dad Love” posts, I couldn’t be more emotionally attached to this little bean butt. She’s the thing I got the most right in my life and I have one job and that’s to keep her safe. Andrea feels the exact same way and that’s why she was in tears in the Emergency Room. Fortunately the doctor had seen this scenario a hundred times and said, “I’ve seen this scenario a hundred times.” She told us how common it was and that parents always feel like the most horrid parents each time they bring their limp-armed kid in. It all works out.

Afterwards I thought Andrea might say, “Please don’t tell anyone this happened.” She really is an amazing mother to our girl. Instead she wanted me to post my picture (I was trying to play photo journalist dad) and let other parents know that  a) you should be careful swinging your toddler around, b) this happens all the time, c) it can easily be fixed with no lasting or chronic effects, and d) you are not a bad parent because you popped you kid’s elbow out. You don’t have to hide from Child and Family Services in a wildlife refuge in rural Oregon. (See what I did there?)

So we are just going to be a little more careful with our peanut butter. She doesn’t get swung around for a few more years. There’s still throwing her up in the air and dragging her across the wood floor in a laundry basket. What could go wrong?