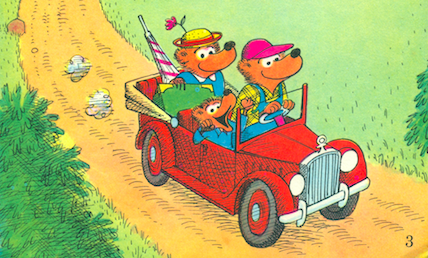 My mother has always been on the verge of serious hoarding. “Don’t throw that away! It might be worth something someday!” I heard that a thousand times. When Cozy was born, I was grateful. Stuff my mom had held onto for 50 years started to come our way, including my 1960s Batman sweatshirt. And a ton of kids books. Each one zapped my brain backwards. I just have to open I Am Bunny, and I’m sitting on my mommy’s lap, fascinated by the artwork and stories. And my mom read to me a lot.

I was excited to introduce Cozy to my love of books (Thanks, Mom!), so I wasted no time reading to my daughter. I took about two seconds to realize that the message that this father was sending to his girl was dramatically different than the one that my mother had sent to her boy. On the one hand it was exciting to see these books sold for only 39 cents when I was little, but on the other side the messages about gender were heartbreaking. From the time when Donald “Dotard” Trump thought America was “great.”

Many of the stories are a continuation of the fairytale traditions from Hans Christian Anderson where some damsel in distress or dainty princess has to be rescued by a dashing prince. So much of the classic Disney filmography is rooted in this sexist trope that has, thankfully, been exploded by Frozen and Moana. These two movies mean so much to Cozy and now I understand why. (Mulan had too much fighting. “I don’t like this, Daddy. Turn it off.”) More of these books followed the domestic dynamic of the mid-century model. There’s mom in the kitchen. A legion of my friends reminded me how messed up the Berenstain Bears books are when you read them through a gendered lens. The same is true for most of the books by Richard Scary and Dr. Seuss. (But I still have a soft spot for Cindy Lou Who.)

Even more books are just male-driven stories. How can my daughter find herself in Where the Wild Things Are? The imbalance really hit me when I was reading Cozy a book called Jumping. It’s about how much boys love to jump. Seriously. I grew up reading the adventures of the Hardy Boys. Will Cozy be left with the Bobbsey Twins? Was Nancy Drew a feminist? Can we get a 21st Century reboot? I do not like green eggs and misogyny.

It became a real struggle to find a book in the boxes that were arriving that had a female character that was somehow equal to the males, let alone in the lead role. Cozy was getting that in her contemporary cartoons, like Disney’s Elena of Avalor and PBS’s Peg + Cat. It was time to update my girl’s library. So we took a walk up to Green Bean Books.

Cozy loves any store that has a “kids’ section.” She appreciates any space that is carved out for “kids not people” (adults are “people” – we have to work on that one). Green Bean is all kids’ section and she loves the feeling that it’s all there for her. (Wait, I’m smelling the seeds of a generation gap.) When I asked for a storybook for a three year-old, the clerk had the perfect recommendation, The Princess in Black. Cozy set down her book about dinosaurs and grabbed the book, plopped down on the little sofa and pretended to start reading.

The Princess in Black is a five-part series by Dean Hale and Shannon Hale. It follows the adventures of prim and proper Princess Magnolia who sneaks into her broom closet to become… The Princess in Black; a superhero who fights monsters. Cozy loves both princesses and superheroes. (Ask her to do her Spiderman imitation.) Seeing her respond to this book was fascinating. It’s 15 short chapters, cleverly crafted, that we’ve read pretty much every night since we got the book. She’s got the whole story memorized and has even picked up on hints that our superhero may get a sidekick in future volumes – the Goat Avenger (aka, the mild mannered Goat Boy).

It was almost like a shock to the system after all these books about male characters, including Richard Scary’s male bunnies, to have a female-driven story. It must have been like women 200 years ago reading a Jane Austen novel for the first time. (I’m not equating The Princess in Black and the Mysterious Playdate to Pride and Prejudice, but I kind of am.) As a male, I could read all these male-driven kids’ stories to Cozy and not notice the impact of it all on her, as girls and women were pushed to the background (and draped in aprons). But three pages in to the PIB and I saw the shift. She has a place in the world of stories. 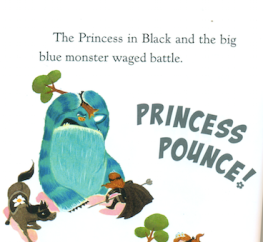 Of course, there is a debate worth having that this place is in occupying the traditionally male-dominated world of superheroes, which often relies on violence to solve problems.  The Princes in Black does open a can of whoop ass on a big blue monster. Sparkle kick! This is at the heart of the debate between liberal and radical feminists. Does gender equality mean that females should want half of the world that patriarchy created. When 50% of serial killers are females can we raise a toast and say, “Equality!” Or are their other ways of organizing ourselves that don’t don’t involve trying to beat men at their own game? As a parent of an evolving girl, I wrestle with this question. A female version of Trump saying she is going to “totally destroy” a nation of millions of people would not be progress.

For now, story time will be about a consistent messaging that Cozy will not be marginalized because she is a girl. Andrea has been reading her Good Night Stories for Rebel Girls. My mother sent a new book about Frida Kahlo, Viva Frida by Yuyi Morales, that Cozy fell madly in love with. And I know that there are now tons of others out there. (Please feel free to make any recommendations.) Seeing how my daughter responded to this one book pierced a gaping hole in my male privilege bubble. It might be time to put The Cat in the Hat on the bottom of the stack. What would you do if your mother asked you?