There is a Blazak tradition whenever I’m at a big Thanksgiving or Christmas dinner with my conservative family members in Chattanooga, Tennessee. While the dessert is being passed around my aunt, out of the blue, will just say, “All these people on welfare need to get a job.” All eyes turn to me and then I have give my lecture about how most welfare payments go to children, the elderly, and the disabled and the “able-bodied” adults who receive welfare are, for most part, working at low-wage jobs. (Fully one third of those working at Wal-Mart receive government subsidies.) They nod and go back to their pie and complaining about “aliens.” 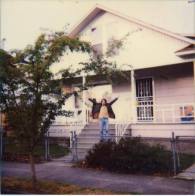 I’ve had a comfortable middle-class life. As a kid, I got pretty much everything I asked for Christmas. Went to a posh private university for college and grad school. Got the first tenure-track job I applied for (with an competing offer from one I applied to second). Paid off my student loans fairly quickly. Bought a house in my mid-thirties. Fattened my retirement fund. Started a family.

And then the shit hit the fan.

When I was studying the rise of the racist skinhead culture, I developed an explanation called the status frustration theory. It’s certainly frustrating to have nothing in this land of plenty which frames the “American Dream” as one of endless economic upward mobility. I argued it is even more strain inducing to have some economic status and then lose it. My skinheads were the victims of Reaganomics. They witnessed their parents being downsized and laid off as America became a “post-industrial” economy. They saw the American Dream ripped away from them and hate groups gave them convenient scapegoats: minorities, immigrants, and, wait for it, the Jews.

Twenty-five years later, after a bizarre collaboration between a psychotic skinhead inmate and a few union-busting university administrators, I was joining them in the ranks of the downwardly mobile. I resigned my tenured position to focus on raising our daughter and my fantasy of writing full-time, but the loss of the salary (and benefits) had a bigger impact than I expected. Suddenly I was the guy I had been talking about in my lectures on social stratification and poverty. Unemployment benefits (which ran out quickly), Medicare, and WIC were not bullet points in a PowerPoint presentation. They were my social safety net.

Fortunately, I married a Mexican and those folks know how to double down and work their asses off. So while I tried to figure out what our “next steps” were going to be, my new-mom wife worked at whatever job paid the best, while trying to nurture her art and family. Andrea told me not to worry too much about the financial situation. “You’re a white guy with a PhD.,” she said.

Three years later, the pressure is on to get back to full-time work. The writing, consulting, and part-time teaching has been hugely fulfilling, but this 50-something needs a salary again. The whole experience has given me a window into the world of the working poor. Glimpses came at left angles. The first time I tried to use our WIC vouchers at the grocery store to “buy” my allotment of milk and bread the cashier helped me because she was also on WIC. Sitting in the free-dental clinic so Cozy could have her new teeth looked at and the social worker asking about my home life. There was a good chance he had been one of my students. Watching the debate over Obamacare and wondering if congress members, fully-insured by the taxpayers, we going to take away my own health insurance. Those glimpses became just looking in the mirror. I was them.

There’s a lot to consider here, but the main rude awakening was just the hustle. The hustle to get to the end of the month. Will the bills get paid? How much room is left on the credit card? Will I ever pay them off? Should I get another credit card? Can I make a payment for one credit card with another credit card? Where can I borrow some money? What can I sell? Can I combine errands to save gas? Do I have a coupon for that? Does anybody owe me money? Can I tap into my retirement account (again)? Can I qualify for a home equity loan without a full-time job? (No.) Can I find a gig that will pay enough to cover the cost of daycare while I’m at work?

That last one is a big one. I could pick up a job while I wait for a real position to land in, but what do I do with my daughter? The average price of daycare in the United States is about $1000 a month. (We pay $510 a month to have Cozy in daycare two days a week, plus the occasional drop-in when I’m working, plus a baby sitter on Wednesdays to cover the period when Andrea is still at work but I have to commute to teach my night class.) It’s not surprising that the number of children living with a grandparent over the last 20 years rose 64 percent. I wish we had a grandmother handy. But that’s America now. Working families have less time with their children. And many, like some of my community college students, add school to their work and family responsibilities. It shouldn’t be surprising that most Americans owe more than they own. I have $13 in my savings account. If we have an emergency, I can buy half of a cheese pizza.

On the lucky side, my parents taught me how to be frugal. (Hey kids, Google that word: FRUGAL). I learned to save my pennies. “Don’t throw that away, it might be worth something someday!” my mother would chant. So I’ve been “liquidating” some assets. It was hard to sell my first Spiderman comic book (autographed by Stan Lee). At age 13, I bought it for $200 and sold it 40 years later for $11,000. That could have been a much-needed kitchen remodel or a grand trip to Europe but it kept the roof over our heads, so thanks Spidey. The nest egg was for a rainy day, but it’s been a mild winter so I can’t help to (finally) feel optimistic about adding to it instead of all this subtracting.

Understanding the daily stress of this insanity (How many phone bills can you miss before AT&T disconnects you?) has helped me to understand how most Americans exist in this nation where the rich get (much) richer while the rest of the country counts the days until their (totally inadequate) payday. It justifies buying a few lottery tickets for the fantasy of paying off all the debts in one fell swoop. It justifies the anger at a neighbor putting in a hot tub while you wait another year to fix the roof. And it justifies daydreaming about putting a crew together for a jewelry heist to rip off people who will drop a couple of grand on shoes they will never even wear.

As a criminologist, that’s been one of the more fascinating psychological aspects of this experience. I get it. I get the temptation to commit the “perfect crime,” playing a self-serving Robin Hood. But also, as a criminologist, I know there is no such thing as a perfect crime and arrest only make poor people poorer. It’s a financial black hole. It might make a great book but one I imagine my daughter would rather I don’t have the opportunity to write. I’m just saying, I get it, and I’m guessing a lot of my not-private-school students do as well.

The only human path that matters is the one that builds empathy for our fellow humans. I am on that path. And when I climb out of this financial hole (and I will), I will remember the daily stresses of the working poor. I will advocate for them. Don’t fall for the “trickle down” lie again. People need living wages that actually meet the cost of living in America. And I will tell my wife to feel free to quit her job. She’s been shouldering the economic weight of our family for three years. She deserves a break. As do most working Americans.