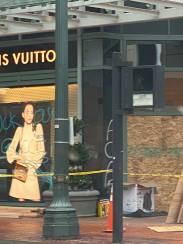 As rioters ravaged Portland Friday night at 2 am, a local news anchor lamented how sad it was that the Louis Vuitton store was being looted. I thought Luis Vuitton Incorporated would survive, unlike the man named George Floyd.

There was a time when the lure of an exciting riot would have drawn me to the street. The belief that social justice could be advanced by screaming at authority would have inflamed my voice. Then I learned how deeply social evils, like racism, were woven into our society and how broadly complex anything approaching a solution would be.

Let’s start with the obvious, the murder of George Floyd on May 25th was a racial lynching by police. It took Minnesota authorities four days to arrest one murderer, Derek Chauvin, the officer who had his knee on the neck of Floyd for nearly nine minutes, including three minutes in which Floyd was unconscious. The fact that in took law enforcement four days to arrest this murderer must have surprised a lot of black people that it was so hard to get arrested in Minneapolis. The other three officers that participated in Floyd’s murder, well, we’ll see, I guess. And arrest does not equal conviction; the track record favors the murderers in these types of cases.

But we’re supposed to have faith in the system. After generations of George Floyds, I’m not 100% sure why. 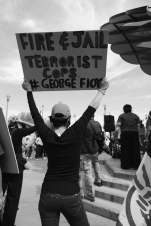 I’ve written so much about this issue and I want to write something now, but I’m glued to the TV watching another night of America convulsing as it tries to marshal that antibodies to fight the pandemic of racism that’s ravaged its body since its birth. I’m trying to explain this to my five-year-old and trying to find evidence that anything will be different this time. My thoughts are disjointed. Do I support the rioters? Do I invite a cop out for beer and race talk? Do I make a bid on Ebay on a looted Louis Vuitton bag, a souvenir of the great uprising of 2020?

So here are some random thoughts as America burns. Again.

I’ve spent a career a partnering with law enforcement to work on issues like hate crimes and domestic terrorism. I’ve worked on trainings for law enforcement and helped to develop policies that help police understand the trauma experienced by crime victims. I went from “cops are pigs” to “police reform” as I matured and understood the social work aspects of law enforcement and the healthy communities well-intentioned peace officers can help create.

But now I’m not sure that’s enough. 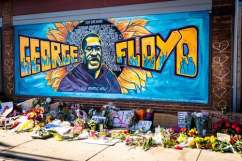 While we still have departments that allow various choke holds, and don’t immediately arrest officers who are accused of the murder of unarmed civilians, and defend a macho police subculture, it seems like Eric Garner, and George Floyd, and Breonna Taylor, and all the others will just be names on an ever-growing list that only magnifies the trauma of black America. The murder of black civilians by police has not significantly decreased since Ferguson even with the important changes that have been made. Maybe it’s the very structure of policing in America that’s the problem. Maybe we should start figuring out how other countries keep the peace and chase the crooks. Maybe we should burn the old system down. Out of the ashes…

I really don’t have the answer. I just know it’s up to white people to do the work to end racism. 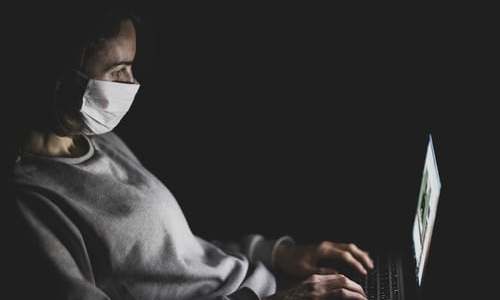 The nice thing about having a “paradigm” is that there’s a formula to plug in to when challenging issues emerge. Liberals and conservatives, religious fundamentalists and scientists all have “narratives” they can utilize to make sense of the world. Similarly, feminists have a good starting position, that elements in society work to uphold patriarchal male power structures or challenge them. That’s feminist thinking in a tiny nutshell. 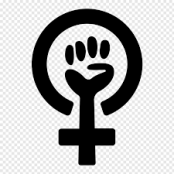 So what’s the feminist position on the coronavirus?

Feminism is not monolithic. There is as much debate within feminist circles. Just mention Hillary Clinton. A liberal feminist, a radical feminist, a Marxist feminist, and an eco feminist walk into a bar… So rushing to a feminist position on a global pandemic is harder than it looks. Even after three months of pondering the matter.

While no feminist would celebrate sickness and death (that’s a male thing), there could be a feminist “I told you so” element to this mess. Mother Earth might be offering humanity a time-out for the bad behavior of waging war and dumping killing pollution. Eco feminists highlight the importance of healing and with endless wars and traffic jams on pause for a minute, we get to experience the joy of a planetary healing. There are sea turtles on Miami Beach and dolphins swimming in the canals of Venice! Will we really want to return to the nasty business as usual after this micro-organism mandated retreat? Regardless, the lesson remains that man does not control this planet. 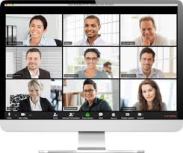 And here’s a little “gender equality amid pandemic” point that my wife brought up; Zoom as a great equalizer. Zoom and other remote meeting platforms have become the new way to exist publicly. My classes have weekly Zoom meetings. On these platforms every person has an equal space, both in terms of the size of their video box and their volume. (“Everyone on mute?”) Since we are working and learning from home, the impression management is way down. Women don’t have to do their makeup and men don’t need a tie. We’re all equally casual in our Brady Bunch grids. I’ve done lecture videos after waking up from a nap and done interviews with a beer in my hand. There’s no judgement in a pandemic. We’re all in this bad hair day together. And if a woman is Zooming in to work with a toddler climbing on her neck, all respect for her for even bothering to unmute her video.

The other side of the ledger is less hopeful. There’s plenty of reasons to see this nightmare as another opportunity for patriarchal power grabs. The first thing to come across the wire when all this started was the impact that the lockdown was having on women who were in domestic violence situations, trapped in spaces with their abusers. By April, reports of calls spiking to domestic violence around the globe made the sad trend undeniable. Women began passing desperate messages in code to pharmacists, hoping for a lifeline away from the violence. Similarly, young LGBTQ people who are stuck at home with homophobic adults must be praying for the moment for this whole thing end.

The women on the frontline of the pandemic have taken the brunt of the risk. Working in health care and food services, taking care of the elderly, they are the most essential of workers, and the most expendable when the crisis hits the fan. They clean the bedpans of the infected, while Ivanka fixes her father’s make-up.

As is the norm these days, Donald Trump simplifies things for us. Watching him puff up his chest in his daily performance as the manly man in charge (He don’t need no mask!), is just a lesson in the absurd limits of masculinity. (The fact that he’s claiming to take hydroxychloroquine just adds to his soft orange underbelly.) But it’s not his buffoonery that props up patriarchy, although if a female leader demonstrated such incompetence, with nearly 100,000 Americans (so far) dead, she would have been eaten alive.

It’s Trump’s “war-time president” rhetoric that’s the big gender reveal. While things are cooling down on the battlefields of Afghanistan, Syria, and Yemen, look at how quickly we long to be going to war against something. And like those wars, it’s always futile. The War on Poverty, the War on Crime, and the War on Drugs didn’t end poverty, crime, or drugs either. And some would argue that they made those problems worse. Likewise, the war on Trump’s “invisible enemy” won’t “defeat” COVID-19. We learn to live with disease, and adapt to the coexistence. If you’ve ever gotten a flu shot or worn a condom, you have participated in that adaptation. Trump’s war has inflated the curve, not flattened it. 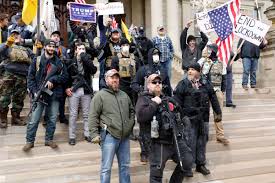 When he refers to the “invasion” of the “Chinese virus,” (most infected folks entered the U.S. from Europe), he’s playing into the “Us vs. Them” binary that masks the naturally complex path diseases take. But he has to keep it simple for his simple base. This has involved the president of the United States of America sending tweets to quasi-domestic terrorists. His call to “liberate Michigan” (governed by “that woman,” as he calls her), and other states governed by Democrats, has triggered the anti-government militia men. Armed with AK-47s and rocket launchers (seriously) these “freedom” lovers in MAGA hats (and a handful of “their women”) have been seen on state capitals, spreading their germs and threatening to launch a civil war if they don’t get back their God-given right to go to the mall to buy camo wife-beaters.

The “War on” rhetoric is tired but it works. It gets boys to men ginned up to go in to battle. And like all battles, there are casualties. The workers in the meat packing plants in Iowa who have died with ventilators down their throats are just abstract statistics to his base. And mostly brown statistics, at that. Ivanka is still healthy and the family stock price in hydroxychloroquine is only going up. As Sartre once wrote, “When the rich wage war it’s the poor who die.” Trump, the four-time draft dodger, is great at pretending to be a warrior (remember his celebration of “his generals”?), but the men, women, and children who will suffer and die because of his hubris are evidence of dire limitations of the blade and the perils of unchecked toxic masculinity.

So has this virus reinforced patriarchal power and the oppression that comes with it?

While we take a break from mass shootings and realize the great labor of all the women who stayed home with the kids without pay, I’m hoping we can use this moment to deflate the dumb puffed up chests of male rule. We have a moment to just talk to each other. Just think of all the conversations husbands are having with their wives because there is no basketball on TV. If ever there was a time to listen to women, it’s now. Maybe, anti-government/pro-Trump “protestors” aside, the earth is turning the corner. We’re ready for a paradigm shift. 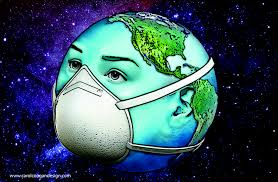