You’ve gotta think it was pretty bad for TV personality Bill O’Reilly to get kicked out the misogynistic cesspool over there at Fox News. Papa Bear was booted from the right-wing network this week after reports surfaced that Fox had payed out more that $13 million in settlements to women over sexual harassment allegations. The grab-ass environment created by serial predator and Fox CEO Roger Ailes sounded like something from the first season of Mad Men. Meanwhile Fox News stalwarts Sean Hannity and Donald Trump have gone out of their way to defend these two men and attack their accusers. Is this 2017? Oh, right, making America “great again” takes us back before the time of pesky sexual harassment laws. Before those humorless feminists brought an end to the office party fun-fest.

Fox News is not unique. I don’t doubt that there are similar versions of this dynamic in almost every workplace, including CNN and MSNBC. The difference at Fox is that the powerful men doing this were pretty much the most powerful men in the room. Most workplaces have at least one dumb-ass guy who doesn’t know how to interact with women as fully functioning humans deserving of the same professional respect the old boys club gives each other. Like a character on The Office, his offensiveness is a product of living inside a boys club bubble.

On the most basic level it’s inappropriate comments that female employees get on a regular basis. “Sit up straight, honey.” “Don’t let that donut spoil your diet.” “You should smile more.” “Your husband is a lucky man.” On the surface, it might seem pretty harmless. But the sheer volume is a reminder of the subordination women are supposed to endure and a reinforcement of the sexist trope that women are supposed to be seen and not heard. And if she says anything to interrupt the comments, she’s a bitch. “I was just being friendly.” “It was just a joke.” “Don’t get uptight.” Just go back to work, asshole.

The comments can be a set-up for the next level. If she’ll let a dirty joke slide and not “freak out” over a possibly inappropriate non-work related text, maybe it’s time for the quid pro quo. The offer she can’t refuse. “If you do this for me, I can open doors for you.” Or the converse, “If you don’t do this for me, you’re out on your sweet ass.” That’s where O’Reilly got busted. He’s a star and, according to President Trump, “when you’re a star they let you do it. You can do anything. Grab them by the pussy. You can do anything.” One too many women said “no” to Old Bill, and without Ailes there to protect him, he’s now out on his blotchy keister.

I’ve heard so many versions of this story from women, including my own mother who filed a complaint with the EEOC in the 1980s in a pretty egregious case. She was brave to say “no more,” but lost the case because the other victims were afraid to come out of the dark. Those women wanted to keep their jobs and my mother lost hers. But in this day of texts and emails and instant messages, there’s a lot more evidence to file successful claims. These days it’s more likely there will be a settlement or maybe the harasser will be removed. (Although both Ailes and O’Reilly leave with millions of dollars in severance.)

I know I have been guilty of making inappropriate comments, thinking I was just being funny. As a feminist sociologist, I’m on guard, but I’ve made my share of mistakes. The difference is, if a female colleague, student, or even Facebook friend were to say, “Hey, I don’t think that’s appropriate,” I would immediate stop and evaluate what I said or did. That’s because I respect women and don’t want them to think I’m a douchebag. I know my male privilege could dictate that I just blow it off. “Maybe it’s that time of the month.” But I’ve learned (often from mistakes) that if you don’t have women as your allies, you’re alone in Guyland. That might have been cool when you were a teenage “bro,” but it’s no place for an adult male.

So anyway I’d be rubbing your big boobs and getting your nipples really hard, kinda kissing your neck from behind… and then I would take the other hand with the falafel thing and I’d put it on your pussy but you’d have to do it really light, just kind of a tease business….

(No wonder Donald Trump loves this guy.) Now let me say this – consenting adults are allowed do and say all kinds of freaky-deaky things. If Bill O’Reilly wants to propose rubbing Mediterranean food on a female partner’s vagina while he’s got a Magic Wand up his butt, that’s their business. I don’t judge. (And I think he meant loofah, not falafel). But Mackris contends it was unwanted. ““Tyrannical and menacing” is how the suit describes the contact by O’Reilly, who was (of course) married at the time.

O’Reilly didn’t propose any such shenanigans with me. (Although during the over-the-phone pre-interview I mentioned that I was just finishing my falafel and was almost disinvited from the no spin-zone.) But he did make the interview all about him. I tried to talk about lingering racist anger at inter-racial couples and he went off about how gets death threats all the time and it’s just the price of fame. (Al Franken later told me that this was a complete lie and there are no documented death threats against Bill.) The interview ended with O’Reilly saying, “OK Professor, you get the last word.” And then he cut me off mid-sentence to blather more about his persecution.

Bill O’Reilly is a 67-year-old narcissist who will probably never get it. He doesn’t think he did anything wrong and the current President of the United States of America doesn’t think he did anything wrong. But there are a lot of young guys who look up to these old men as role models. Their victims will suffer without the millions of dollars Fox News paid out in hush money. And now the low-level dickwads who are telling their female co-workers to “Sit up and smile more,” have some pretty powerful icons on their side.

But times are changing. The old guard is dying and a new band of brothers is going to defend their sisters. The banishment of Bill O’Reilly should encourage all victims of sexual harassment to speak out. No one is allowed to get away with this. Not the guy who works in the pizza shop, or the law firm, or even a guy who has his own TV show. And certainly not the guy who lives in the White House. So bros, grow up. If a woman tells you, “I don’t think that’s appropriate. Please stop.” – don’t blame it on her period. Check yourself.

To report a case of sexual harassment, please visit the EEOC website: 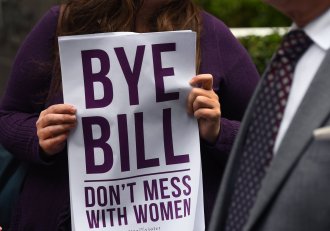 Them and a cup of coffee at Cafe du Monde is all I ever wanted. #cafedumonde #cozyblazak @amongstbutterflies.90 #neworleans #roadtrip2021
Damn Good Dad