Feb. 16, 2015 My daughter Cozette turns 6 months tomorrow. In 30 weeks, I think I’ve gone through every emotion on earth. Part of it is about the things that Cozy has done. (She almost said “Dada” last night, kinda, “Dawah”). Part of it is the anticipation of the things she’s about to do. (She’s so close to being able to sit up on her own). And part of it is the recognition of the the things I am now capable of. (More than once I’ve put my hand in her diaper to see if she’s wet and then run my fingers through my hair. So what!). 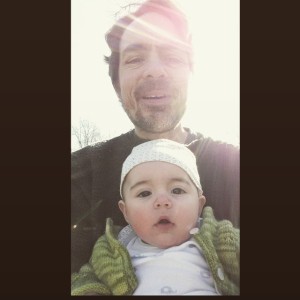 One of the most amazing things is to see her evolve as a person with her own personality. She is incredibly curious. I love when we go to the grocery store. I put her car seat in the grocery cart and see her face light up. She’s going to have lots to look at at our local Fred Meyer. The Valentines Day balloons blew her freaking mind. Watching her eyes focus on the items we pass by as we go down the isles makes me think about how a year ago those eyes were just forming inside mother’s womb.

She already has mad social skills. She loves being around new people. But you can see her size them up. Trust, but verify. She knows she’ll get a reaction with her smile. I think Cozy will know how much happiness she can bring the people around her.

Cozy is also really strong. She can stand up when she leans against something and even do a little dance, kind of a boot scootin’ boogie. And then she falls over like a drunkard. This week she started using my hands to pull herself up and it’s impressive. She’s got a seriously strong core. My bet is she will be sculling in the 2036 Olympics. (Google it, you layabout.)

I think her best quality is her empathy. It’s the one thing I want to give her but she’s already got it, when so many adults are devoid of any empathy whatsoever. Anyone who has read my first novel, The Mission of the Sacred Heart, can guess that I have struggled with intense depression at different points in my life. Anyone who understands this knows that it can get the better of you when you least expect it. In many ways, Cozy knows exactly what I need in those moments.

One of those moments was last week. I was just laying on the floor of the nursery wrapped up in the uncertainty of life right now. For the first time in decades, I have no idea what my future looks like. I’m scared shitless. Maybe I should’t have quit PSU. Maybe I should’ve gone one more round with the administration and perhaps (finally) won, winning the financial security my young family deserves. On one hand I’m excited by what I think is going to be a thrilling and successful new chapter. On the other hand I feel like we’re going to be living in a trailer down by the river, undone by people who could care less about the well-being of my child. 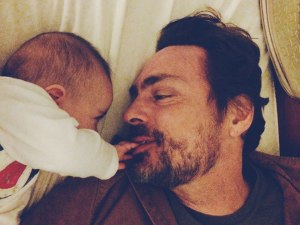 Cozy was laying on the floor next to me. I just couldn’t move, stuck in a black cloud. Instead rolling around (like she usually does), she just stuck close to me. She put her little hand on my cheek and stared right into my eyes, like she was saying the thing I’ve told so many others who are sunk in the trench of depression, that at some point the bad stuff is in the rear view mirror and you’ll feel so good for getting through it. It was such emotional moment. I was having a deep conversation with a little baby who needed me to be there for her but also for me. I was about to cry and then she farted so loud her diaper fell off.

I’m super glad Andrea and I are Cozy’s parents. I think we’ve got a strong set of values rooted in love, justice and creativity.  But I think Cozy would turn out fine if she was raised by Kim Jong Un and Mama June. This baby has soul. And she saves me every day.

And you can get my book at Powell’s by clicking below: