The other day I was pushing Cozy in her stroller down NE Alberta St. on our daily trip to the coffee shop and a woman said, “You’re a good dad.” I just smiled. Is it that strange to see a man with his child in the middle of a weekday? Being one of the over 2 million stay-at-home dads, you start to notice something; It’s a mom’s world. Especially if you are out looking for a yoga class. Dads are parents, too, you know.

For 25 years, I’ve lectured about the gendered nature of advertising. I’ve had students do random samples of ads during football games and soap operas and discuss the themes about men and women. Or fashion magazines and car magazines (that’s a good one). I’d have them read Simon Davis’ excellent 1990 article, “Men as Success Objects, Women as Sex Objects: A Study of Personal Advertisements.” The message is clear, men are on the go and women stay at home with the kids and look pretty. 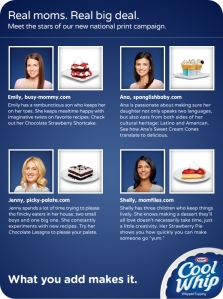 It’s not 1955, but we are still bombarded with images of mom manning the home front while dad does out to make a buck. Products are “kid tested, mother approved.” Sure, there’s occasionally a dad making dinner, but he’s an idiot (not a chef) so he needs an easy solution. Pizza night!

Some might say, what’s the problem? Mom’s deserve recognition for all the hard work they do. True. But there is a feminist perspective that says men get the public sphere outside of the home and women get the private domestic sphere, and that’s all. They have to keep the house clean and the kids fed so the man can go out and get the glory. That behind every great man is a woman washing his underwear.

The goal of second wave feminism was to liberate women from being ONLY unpaid domestic servants. Women deserved equal participation in the public sphere. But to make this work, men had to help out with the domestic chores.

Instead, we got “supermoms,” who work 9 to 5 and then come home and get dinner ready. However, we are finally getting a generation of men who are making dinner and changing diapers in massive levels. Some of this is the result in cultural changes around gender. Real men know how to bake quiche! But some of it has to do with the change in the economy. The “manly” manufacturing jobs have been replaced by low-paid service sector jobs. Fifty years ago the American workforce was dominated by men working at GM. Now it is dominated by women working at Wal-Mart. 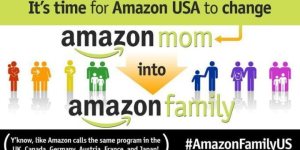 But you wouldn’t know this from our pop-culture. As I mentioned last week, the campaign by a Seattle stay-at-home dad to get the Amazon Mom service changed to Amazon Family is just the tip of the iceberg. Finding a place where dads are fully recognized as equal caregivers is a challenge even in liberal Portland.

I found this out when my wife suggested I take Cozy to a baby yoga class. I love yoga and the idea of Cozy doing “happy baby” poses next to me on the mat seems like a perfect activity. The problem is, every single class is a “Mom & Baby” class. No dads allowed. I know because I made several inquiries.

As a feminist, I can appreciate women wanting a “safe space,” to work on some of the postpartum body issues. But does a dad with his baby going through his vinyasa flow with his kid next to him imply “creeper”?

The demand is there so I think “Dad & Baby Yoga” is coming soon. I got an email from one Portland yoga proprietor who said, “SO many papas have asked, that I am considering alternating weeks: mama baby, daddy baby.” I can’t wait to go and write about the experience there. Hopefully it will happen soon. Cozy is kicking my ass when it comes to being able to put your feet in your mouth.

The larger issue is the marginalization of dads and how it reinforces patriarchy. Men can be high paid chefs, but can’t be expected to make breakfast for mom and the kids. Why are these men doing the work of women? They should be out slaying dragons! The absence of the nurturing dad in our popular culture adds the pressure to the “supermoms” and undermines the promise of true gender equality. Dads are parents, too.

It’s exciting to see things change. The “dadvertising” I wrote about after the Super Bowl was a step in the right direction. The growing voice of dad bloggers is adding to the momentum. Soon we may see images of dads in the kitchen who aren’t bumbling fools. Dads taking their daughters shopping and dads who can fold laundry. This would be twice as good for families with two dads.

Until then I’ll just do yoga with Cozy in the living room.