A few years back I started writing a book about all my rock star stories and the lessons learned. I was going to call it Jukebox Hero, and there was gonna be a big chapter on the 70s band The Runaways. The recent Huffington Post article about the rape of bassist Jackie Fox by the band’s “manager” Kim Fowley has got the band back in my head and the normality of the rape of young girls in the public discourse. Or at least it should.

The Lost Girls. One famous band. One huge secret. Many lives destroyed.

But first the story of how The Runaways turned me into a riot grrrl before Carrie Brownstein was in kindergarten.

A thousand years ago, in 1977, before iTunes, there was the Columbia House Record Club. You could get 12 vinyl albums for a penny (with some vague agreement that you would sell your soul to the devil, or buy more LPs later). At the age of 13, I used it to complete my Kiss collection. I also got the ELO album that Mission of the Sacred Heart is based on. But I only had 11 selections. What to get to finish the order? 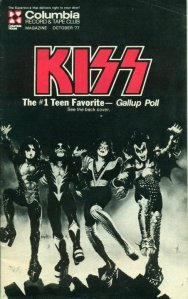 A friend had the recent Columbia House catalog. I found a little section for “punk rock,” something I had been reading about in Creem Magazine. They had Patti Smith, the Ramones, and a group of five teenage girls called The Runaways. Of course, being a 13-year-old boy I chose The Runaways. The end of that story is that record ended up being my favorite of the 12 and opened me up a whole universe of music you couldn’t hear on the radio. The music for us misfits, born to be bad. 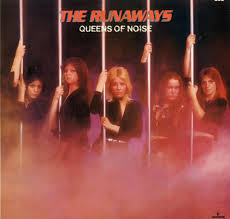 That album was Queens of Noise, their second album. They were only a few years older than me, probably 11th graders. They looked mean and not cutsie, which made them hot. I wasn’t old enough to know that girls weren’t supposed to rock like this. I would blast “Neon Angels on the Road to Ruin” from bedroom in Stone Mountain. Lita Ford’s massive guitar groove and Jackie Fox’s epic bass-line would echo through the Woodridge subdivision. Punk rock. This was my band and these were my people. My generation, baby! That was the year I saw Led Zepplin in concert and fell asleep. Give me loud, fast and hard.

I finally saw them play in February of 1978 just a few days after my 14th birthday. I was finally allowed to go to concerts without my mom. They played at the Atlanta Municipal Auditorium, a hall that usually hosted wrestling matches, opening for the Ramones (with The Dynamic Atlanta Cruise-O-Matic first on the bill). Jackie Fox and singer Cherie Curie had just left the band, so it was just Joan Jett, Lita Ford, drummer Sandy West and new bassist Vicki Blue blowing the doors off. They didn’t play “Neon Angels,” but I was still in heaven. Not because they were “hot girls,” but because they were my age and they rocked with a fierceness Beyoncé could only dream of. Oh, and the Ramones were pretty great too, but that’s another chapter.

When Joan Jett’s first solo album came out, Bad Reputation, all the hip kids at Redan High School got it. That means me and two or three others. The rest were still jamming to Ted Nugent and Styx. Then “I Love Rock and Roll” came out right as MTV was landing and it was all over. My little secret rock singer belonged to the masses and a million karaoke bars.

I got to meet Joan in early 1982. I was working at Turtles Records & Tapes and she did an in-store appearance at the Northlake Mall store. I took my Runaways albums for her to sign and she appreciated the pre-hit fandom. In the picture of us together, you can see a white streak on my jaw-line. That’s a big dollop of Clearasil I didn’t properly wipe off my face. I was 18, OK?

A few years later, I became friends with Mickey Steele of The Bangles. We were in Nashville and I was talking about my love for The Runaways and how they really set the stage for “girl bands” like The Bangles. That’s when she told me she was IN an early version of The Runaways and co-wrote “Born to Be Bad” on the Queens of Noise album! Shortly, after that I became good friends with LA music icon Phast Phreddie Patterson. Turns out The Runaways first show was in his living room! I was so close to this band that meant so much to me when I was a pimply teenager.

I knew about Kim Fowley because I studied the liner notes of every album I put my hands on. He wrote songs on Alice Cooper’s Welcome to My Nightmare and Kiss’ Destroyer albums. His name was on the American Graffiti soundtrack. He wrote, “Alley Oop!” None of those sources let on that he was a sexual predator. OK, maybe Kiss’ “King of the Night Time World” was a clue. “It’s so bad, goin’ to school. So far from me and the dirty things that we do.” He wrote that.

In 1997, I was in LA and saw that drummer Sandy West was playing a show at the Coconut Teaser on Sunset. It was a great set and Cherie Currie showed up to do a few old Runaways songs with her. After the show I told Sandy my Columbia Record Club story and she dragged me over to Cherie to retell the story. I was hanging out with the Runaways! I’m glad I got to meet Sandy as she died of cancer in 2006. She was a true pioneer for women in rock music.

By the time the movie about the Runaways came out in 2010, the Kim Fowley story was out. The 2004 documentary Edgeplay:A Film About the Runaways danced around it. Fowley was in that film but Joan Jett was not. But the 2010 film, starring Dakota Fanning as Cherie Curie and Kristen Stewart as Joan Jett, heavily leaned in to the idea that Fowley was more of a warped Svengali than a visionary of feminist rock. “Creep” would be the better word. I was sad that Jackie Fox’s role was written out of the film (I now get why she refused to allow her likeness to be used) but it did give me another chance to meet Cherie.

There was a screening of the film at the Hollywood Theater in Portland and Cherie talked a bit after the movie. When I asked if they thought they were “punk rock,” I dropped that I had seen the band in 1978. There was a a groan from all the young women who would have loved to have been there. The benefit of being old I guess. Anyway, I reminded Cherie that I met her with Sandy and got her to sign the Queens of Noise album that Joan had signed 28 years earlier.

After that we briefly became Facebook friends but she routinely attacked me and my friends for our liberal views, finally unfriending me. Turns out she’s a Tea Partier and sort of a female Ted Nugent. Kind of ironic for a woman who brags about having sex with Joan Jett. Dagger to the heart, Cherie. 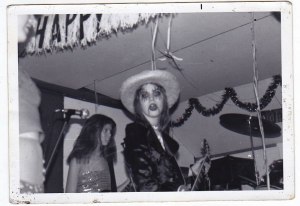 This past week The Runaways are back in the news cycle with Jackie Fox’s revelation of the story everyone has danced around for all these decades. On New Year’s Eve 1975, she alleges, just a week after her 16th birthday, entering into a scene that has occurred in endless permutations. Back at the hotel, after the show, a roadie gave the teenager multiple quaaludes. The short version is that Fowley then entered the room, took her blouse off and raped her with the handle of a hairbrush while other members of the band watched. The Huffington article is hard enough to read so imagine the worst.

Fowley went down to cancer in January so he can’t reply. But Fox’s (real name; Jackie Fuchs) motive to telling the story now is to better understand the bystander effect and how her young bandmates are not to blame for not intervening in the attack. Of course, right-winged Currie quickly posted a message that she was the victim of these allegations and would mount a Go Fund Me campaign so she could afford a lie detector test. (Facepalm.) And Jett has said he doesn’t remember the events as told by Fox but if it had happened that way she surely would have stopped it. (You really want to imagine Joan Jett kicking Kim Fowley’s ass through the wall). Both women showed their support for Fox and her path through this. None of us were there so we’re likely to let our sympathies determine what we think the real story is.

The more important thing is how common this story is and how much we DON’T WANT TO BELIEVE IT. You (I mean, YOU the reader)  know so many women who were victims of rape when they were very young, but there is this denial that is just infuriating. Just think of all the people who defended Bill Cosby. When Fowley died in January, Joan Jett delivered a heartfelt eulogy at his Hollywood funeral. Many wondered how a woman who was the “godmother of riot grrrl” and helped to organize the Home Alive project after the rape and murder of Gits singer Mia Zapata could honor a man who was well know to sexually prey on underage girls. Is it just because “that’s the way it was in those days”? Or is our rape culture so normalized we’ll let a abusive monster slide because his name is on a stack of cool records?

It’s confusing because I want my daughter to love The Runaways the way I did when I was 13. If I have to tell her to turn down “Neon Angels on the Road to Ruin,” I will know that I have met one of my primary parenting goals. But she’s going to know that the rape of girls is part of the story and such a common tale behind so many things she will love. I would like her to think, WWJJD? (What would Joan Jett do?) but in this example, that might be the exact wrong thing. I don’t know. We can’t blame people for paralysis that being a bystander can create. But we can celebrate those who bust through it and act to defend those in desperate need of action. Jackie Fox is a really important name in the history of rock music. But her story is more important.

Side Note: Today is the first anniversary of Andrea and my beautifully simple wedding in a casino chapel in Reno. I hate that we are apart, but pledge to be her ally and supporter until death do us part. I love her more every day and there will be fireworks when I see her in five days!

7 thoughts on “When our heroes are raped: Loving and learning from The Runaways.”