I’m loving my time in Mexico and we’re not even half-way through the adventure. Every day holds a dozen new sensations and the people are so generous here, it puts self-absorbed Americans to shame. Mexico is a complex country, existing in the high tech modern and almost feudal rural worlds at the same time. My feminist brain has noticed some deeply gendered realities, but I have to remind myself that it’s not just Mexico that can get caught in the past. I’m sure that rural Alabama is basically the same. 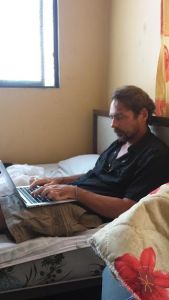 I’m back with my family in Andrea’s grandmother’s town. It’s a little place called Puente de Ixtla in the state of Morelos, near Mexico City. The house is really a group of houses for the family. Andrea’s abuela lives in the house in front and some of her dozen children live in other houses on the property. It’s like a family compound known as a vecindad and it keeps the family close to each other. That means there’s a host of uncles that can help take care of grandma.

But in reality, it’s the uncle’s wives that do most of the work. In a classic gender division of labor, the women stay in the house cooking and cleaning constantly. As a guest, it’s wonderful to be the recipient of such hospitality. I can’t say no to all this amazing food, but when I helped Andrea wash the dishes, there were some laughs. What’s a man doing washing dishes?

This isn’t just a rural Mexican thing. Dorothy Smith wrote about this over forty years ago. Women are relegated to the domestic realm while men exist outside the house. Virginia Woolf wrote about it long before that. There’s really no reason for the woman here to leave the house except for an occasional trip to the market. There’s even a whole army of beeping trucks and honking bikes who will deliver everything from tortillas to propane to your door. The streets are filled with a barrage of these sounds on the lookout for housewives who will flag them down.

You could make the case that this system exists because it works. But who does it work for? Just like Betty Friedan addressed in The Feminine Mystique in 1963, these women are fully formed human beings, not domestic robots. Just maybe, at one point in their lives, they imagined themselves pursuing their own dreams and goals. Of course this way of life is so deeply rooted, being a “good wife” may be the only objective.

This gender dynamic played out last night. I got pulled in to a drinking contest with an uncle we will just refer to as Tio Diablo. I let my own macho desire to not be shown up get the better of me. I didn’t want to be the “American wimp” with this hard drinking lot (and I’m paying for it today). A group of us were sitting outside drinking 40s and Grandma, 84, was chugging the Coronas. One of the uncles’ kids is a beautiful 4-year-old girl and Grandma gave her a sip of her beer. I was a bit shocked but then she started just sharing the beer with this child who was enjoying it way too much. I asked the girl if she was OK and she just smiled. It was a case of bystander apathy. Later, I was angry at myself for not intervening right away. Children’s brain development can be seriously compromised by alcohol. What if grandma thinks it’s “cute” to give Cozy beer?

I don’t expect Andrea’s abuela to be up on the latest research on pediatric cognitive development, but there’s bigger issue at work. This girl is on a trajectory to be another housewife and if she loses a few brain cells, it shouldn’t interfere with her ability to get supper on the table. Added to it is an element of racism. Because this little girl has more of an indigenous Mexican look she is also devalued, as opposed to Cozy who is fawned over because she is so “white” looking.

I talked to Andrea about the beer thing and she talked to her mom and there was a little chat with Grandma. So I think the beer thing is dealt with. I did get an epic evil eye from her for bringing my Yankee values to her casa, but who cares, this little girl deserves every possible chance to do whatever she wants to in life. 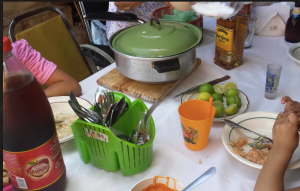 I’ve often lectured about how we can be ethnocentric when viewing other cultures, but sometimes it make sense. I have wonder what it would be like if a wave of feminist consciousness swept Puente de Ixtla like it did America fifty years ago. Men might have to start washing their own dishes! And maybe women would get dressed up and go out on the town for a bit of fun.

I don’t want this post to sound ungrateful for all the wonderful hospitality I’ve enjoyed here.  Andrea’s family is vibrant and hilarious, singing and laughing. It really is like a dream to be here. And Cozy Valentina loves all the attention. Family is so important. I just want everybody in the family to be fully valued.