My mother once called me here in Portland and said, “Randy, I just Googled you. There are some people who really HATE you!” Hi mom, welcome to the Age of the Internet Troll. She had stumbled across a white supremacist website where racists were having a field day bashing me. I have dedicated my life to studying them and their impact on the world so they don’t like me much. I have been branded by them as a “race traitor” and among other things (Jew, homosexual, pedophile, Yankees fan). It’s hard to go to an actual Klan rally these days so these rocket scientists spend all their free white time on the internet.

There is a neo-Nazi version of Wikipedia called Metapedia. For a long time they had an entry on me that described me as a “wheezing Ashkenazi Jew,” promoting a “Zionist curriculum” at “Portland College.” I’m sure my Presbyterian parents would get a kick out of that.

Racists have posted my office number and pictures of my house on line, but it never really bothered me. It meant I was doing something right.  It’s the character assassins that I worry about. Behind their anonymous devices the trolls can take you down out of sheer boredom.

I was trying to track the traffic to this blog last night and Googled; blazak feminist blog. The usual stuff comes up and then a link to an article entitled, “Dirty Jew Perv Info.” It is a pretty extensive thread accusing me of sleeping with students for grades (and being a Trump hater). I almost threw up when I read it. There are a number of fake Rate-My-Professor entries from supposed students who supposedly had to have sex with me to pass a class. They were all posted the same day, the fall of 2015, more than year after my last class at PSU. It’s pretty obvious that they were created by one person but there’s a lot of people who believe whatever comes up on their screen. (No, Michigan did not outlaw gay sex.)

I’ve been teaching college classes since 1989 and ever since then I have had to deal with the rumors that I sleep with my students. So let me put this to rest right fucking now. 1) Nobody has ever gotten a grade in any of my classes for any other reason than an objective evaluation of their class performance. There is no favoritism for anybody. This is the sacred relationship teachers and students have and I am honor-bound to respect it. 2) I have dated  handful of former students (aka adults) in my over 25 years as a teacher, after they had been in one of my classes (not during). People often meet at work and that’s where I work and if everyone is a consenting adult, nobody should care. As I have mentioned, Andrea was in one of my large intro-level classes and we barely even spoke until after the class was over. We are blissfully married and I feel sorry for anyone who doesn’t believe in the incredible power of the love gods to connect two people who were meant to be together.

That doesn’t stop tongues from wagging and fingers from typing. Some of my (overwhelmingly positive) Rate-My-Professor reviews hint at this alleged favoritism and it pisses me off to no end. There is no actual human being that can say, “I got a better grade because I did this naughty thing for Blazak.” There are plenty of fake human beings it seems, but no real ones. There’s even a horrible website that is used to cyber-bully people called The Dirty. It has a post called, “Slept with the Old Teacher at PSU for an A.” First of all, I’m not that old. Second of all, the woman in question was my girlfriend for over two years and the pictures are from our Facebook pages. But it’s one of the top hits that comes up when you Google me. Great. 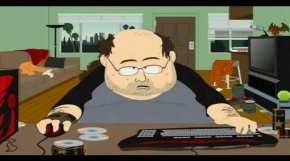 I’m not sure why I’m such a target. I understand why the Nazis and Trump thugs hate me, so maybe it is just coming from them. (Just look at the 519 comments on one of my Trump posts.) I also think the fact that I’m a man who embraces feminism makes me an easy mark. I know there are many women who think men can’t be feminists and I understand that. There are also men who see me as a “gender traitor” for espousing feminist values.  I’ve been accused of “using feminism” to lure mindless females into my sex trap. I’m not even sure how that would work. It sounds like a movie on the Lifetime Channel.

I bring this up for a couple of reasons. The first is that now that my wife and I have a daughter, I really have to think about her safety. These trolls have put our home address on the internet and I have made it my business to know what unstable people are capable of doing. I’d also like to protect my legacy for her. There’s a good chance for a large chunk of her life I won’t be around to respond to the troll narrative and I would prefer her not to think I was a scumbag. I’ve made plenty of mistakes in my life but I’ve worked hard to be respectful of even people I passionately disagree with.

Second is the impossible task of managing your online reputation. Will Rogers once said, “It takes a lifetime to build a good reputation, but you can lose it in a minute.” Or the half second it takes to spread one career destroying rumor. I don’t doubt that the HR ladies who came after me so hard were using this manure as their fuel. It would never stand up in the court of law but their’s is a court of hysteria that’s becoming more and more of an issue. As someone who is back on the job market I don’t feel comfortable telling people to just Google me without forwarding this blogpost first.

As a feminist there are a ton of issues to unpack here, including the nature of power imbalances in relationships. I have to state very clearly that there is a power imbalance in EVERY relationship, especially between and a man and a woman in a patriarchal society. Two twins could be dating (I know) and the one who was born first would have power that the other wouldn’t. It’s how you manage that imbalance that matters. Is it coercive or cooperative? And this thing of treating women in college as “girls” who have no mind (or libido) of their own is inherently anti-feminist, denying women their own agency. So if someone gives me the exact criteria in terms of what age differences is “abusive” let me know and I’ll call Michael Douglas and Catherine Zeta-Jones and let them know if they are safe from the Sex Police in the Hollywood HR office.

Can you tell I’m a little pissed off? I’ve worked hard to build a career that makes a difference. I’ve certainly posted things on the internet that I regret, including when I was mad. It’s a medium conducive to impulsivity and verbal diarrhea. There’s lots I’d like to scrub. But this troll trend is scary. If you can’t build yourself up you tear somebody else down with zero blowback. It explains why good people don’t want to run for office.

It may be a problem of my own creation. I’ve made a career out of provoking people. Most of the time it’s in hopes of opening up larger discussion about things like white privilege and rape culture. But I’ll admit it, sometimes it’s just for sport and I should reel that shit in. I love my wife and daughter with a force that is mighty so I want to protect them from this completely pointless noise. Maybe it gives me a little insight into how Hillary Clinton feels. As someone who occasionally wrestles with depression, I have to remind myself that the people who actually know me actually know me and good people don’t believe everything that they read on the web.

Somedays I think the internet should just be unplugged for good.

NOTE: I recognize that not all trolls are Nazis or Trump supporters. Some have advanced degrees of education and work in universities.

41 thoughts on “Pushing back against trolls”