I tried to calculate how many diapers I’ve changed in the last 27 months. It’s gotta be over 3000. (I know my wife has change a few, as well.) I’m about done. Let’s get this kid on the john, stat!

Doctor Freud put a lot of weight on this stage of child development. The first phase is the ORAL PHASE, taking up the first two years of life. Here, baby is just a raging ID, feeding its hella selfish “pleasure principle” by sticking anything and everything in its mouth: binkies, boobs, toes, Cheerios, checkers, and mortgage checks. Cozy was a freaking Hoover. I’m surprised I didn’t have to Heimlich the house keys out of her esophagus. The oral phase is just me, me, me! Feed me! Wipe my ass! Vote for my best interests!  It’s exhausting.

Freud put a lot of weight on this rite of passage. It’s meant to balance the pleasure seeking Id with the socially oriented SUPEREGO. Think of a devil on one shoulder (The Id) and an angel on the other (The Superego). The head in middle is our EGO and decides who to listen to. If parents don’t potty train a child in time, they can become an Id-driven sociopath. (Don’t mention Trump. Don’t mention Trump.) But if the potty training is too severe, parents can produce Superego-dominated little neurotics. Jerry Seinfeld must have been potty trained at 6 weeks. So a lot of weight is placed on parents not to create future serial killers.

Cozy is starting her Superego training. It must me nice to have someone change you whenever, but she needs to start letting us know when she has to go. Even just after she goes would be helpful. We’re spending more and more time on the potty, trying to make something happen. I like to grunt like Screamin’ Jay Hawkins’ “Constipation Blues,” to give her the hint to put her back into the effort. She’s starting to get it. She’s currently obsessed with farting, so we’re almost there. (Sorry, Mom. That’s on me.)

For Freud, potty time is supposed to be “They” (society) time, but it can also be me time. I’ll see her sitting on her IKEA kids’ potty with a book or singing to herself, or just pondering the merit of the electoral college. As much as I’m ready for this to be the norm, I don’t want this sweet child to inherit my neuroses because I was in a rush to cancel the diaper service.

They must be smarter at her daycare because she had a BM in the toilet last week (getting a blue star!) and I’m still trying to coax a tinkle. I feel like the balance of her entire personality rests on this process. She seems strangely comfortable in a wet diaper which has me worried she might become an arsonist or an ultimate fighting fan. She’ll say, “Daddy, poop,” not when she needs to drop a deuce but when she’s trying to get out of taking a nap. Psychopaths tend to be highly manipulative. Should I start to worry?

The responsibility is almost too much to bear. I know we’re not the first parents to hold our child’s future psychoses in our sweaty hands. I’m anxious for any helpful hints on this project. We want poop in that pot. 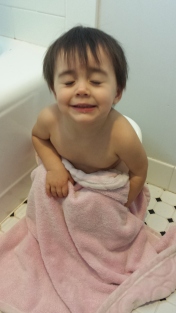