My daughter, Cozy, is now 2 years and 7 months old. (I will not say she’s “31 months old.” I won’t.) Seven months ago she had a few words, in English and Spanish. Now she’s having full conversations and saying things like, “Dad, I want the vanilla yogurt” and “Let’s go up Montjuïc!” (Montjuïc is a steep hill in Barcelona and my nickname for the ungodly steep hill on our street.) While I was writing this, she said, “Daddy, you have a booger on your pants. Oh, no. It’s Honey Bunches!” (her favorite cereal). Then she ate it. She is a linguistic sponge. “What’s this? What’s this?” She can’t learn words fast enough. 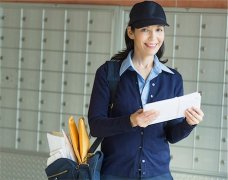 The feminist sociologist in me is reminded how language shapes our perceptions of the world. When little boys are told, “Don’t cry like a girl,” there are a bunch of negative messages packed into one little phrase. When I announce the arrival of the “mailman,” it means a “mailwoman” is something odd. (About 40% of letter carriers are female. Ours is named Anthony.) A big issue in language is normative maleness, something I’ve already written about. Male as norm.

One of the most obvious ways this plays out is the language binary around jobs. Actor and actress. Waiter and waitress. Poet and poetress. The female as less. I’ve tried to banish these gendered terms from my vocabulary. Meryl Streep is an actor, Mr. Trump. She’s not an actress. Not in this house. Cozy will hear enough about the “female as less” outside our home. Here, let the message be clear. Now, Dad’s gotta do some laundry.

This concept was pioneered by French existentialist Simone de Beauvoir in her groundbreaking 1949 book, The Second Sex. Our general discussion of “mankind” is gendered. When we discuss people, we mean “men” with women as the exception. “There is an absolute human type, the masculine… Thus humanity is male,” de Beauvoir wrote. In academics, when it’s time to talk about gender, that’s often code for female stuff, as if men don’t have gender. (There’s a gang of us that specialize on research on masculinity as gender performance.) This filters into our everyday language. If we don’t know for sure that someone (or something) is female, we just assume that they are male. If somebody reads this he’ll learn about normative maleness. (See what I did there?)

This goes all the way to animals. We assume dogs, birds, and squirrels are all male. “Look at that squirrel in the tree. He must be looking for his nuts.” I grew up around horses, so you kinda know the sex of that one, but don’t ask me to tell you whether that sewer rat is male or female. And we all do this. Even radical feminists like me. Normative maleness has been so wired into my brain, I blurt out “he’s” without even thinking about it. We had a mouse in our bedroom this winter. My wife said, “You gotta kill him!” I didn’t even think to say, “Maybe it’s a her!”

How is hearing all these “he’s” impacting my word-sponge daughter? Is she learning that male is the norm and female is “weird”? The thought stops me in my tracks. It’s not a little thing. IT IS NOT A LITTLE THING. There is a massive ripple effect of hearing this little thing over and over again. Think about how both boys and girls process this repeated message about devaluing the feminine. “He” is normal. “She” is not. Seriously, think about it. 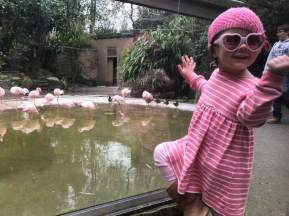 Cozy and I went to Oregon Zoo this week and I tried to be mindful of this messed-up norm. I made a point of using feminine pronouns more than male ones. “Look at that hippo and how big her teeth are.” “That penguin looks like she’s doing a dance.” “Don’t bother that cougar. I think she’s taking a nap.” (OK, the last one was a lady on a bench.) Her main goal of the day the day was to commune with the flamingos but my main goal of the day was to normalize the feminine. We were looking at a parrot and I asked her if she thought it (I almost said, “he”) was a boy or girl. And she said “boy.” When I asked why she said, “Because he’s silly.” So I don’t know if I achieved my goal or not. It was a pretty silly parrot.

I had a professor at Emory who would switch pronouns each term. Fall semester he would use male pronouns and Spring semester he would use female pronouns. Nobody said anything during the fall class (or noticed it), but the guys really got upset in the spring. It was a brilliant way to make an important point. What were those male students so angry about? That they are also co-eds?

There’s a 50/50 chance that animal your looking at or that person you don’t know is a female. If saying “he or she” seems like too much damn work, why not just say “she” to make up for all the years you’ve said, “he.”  I just hope that if someone reads this, she’ll think about the infinite power of language.

5 thoughts on “That Pig is a She! Normality of normative maleness”