It’s a common refrain around here – “Where did the baby go?” She’s just grown up so fast (said pretty much every family ever). Besides becoming a full on person, somewhere this past year, she became a full on girl. As a sociologist, for decades I’ve harped on the mantra that we are products of our environment and that gender is social construct. So I’m not quite sure how this happened. Is it my fault?

We really worked on the gender neutral thing from day one, including dressing her in “boy” clothes, but the girl just loves all things pink. She’s had her stay-at-home dad as her primary caretaker but she’d still rather put on make-up with mom. And it’s not that her working mom is the most girly-girl. (Mexican women seem to have a bad-ass streak woven into them, but you didn’t hear that from me.) All our plans to dominate her nurture seem to have been thwarted by her nature.

I’ve said it before. You don’t raise children in a vacuum. Cozy is not a lab project. She has countless influences outside of mom and dad, including little friends, teachers, grandmas and tias, and, of course, the media. All play a part in the nurturing of her gender cues. I blame Minnie Mouse. I think that was her first role model. Minnie, who just got her star on Hollywood Boulevard last week (40 years after Mickey), is not exactly an action hero. She’s come a long way, baby, but she still plays her cute card. Just watch where her knees go (in) compared to Mickey’s (out). Is Minnie a virgin to Mickey’s playa? We love Minnie Mouse around here but I’m betting that rodent has her own #metoo story. (I’m looking at you, Harvey Weinstein.)

Cozy’s moved off Disney (maybe because we lost our Disney Channel connection) and on to the Paw Patrol. I don’t quite know what to make of this cartoon that has been mass marketed beyond belief. (Yes, she is wearing Paw Patrol undies today.) I like the positive go get ‘em attitude – “No job is too big, no pup is too small! – but it’s not like they are taking all that canine energy to improve access to the treehouse for dogs with disabilities or out defending the Paw Pussy Cats from being grabbed by the evil Drumpf. The gang is mostly male but there are two females (don’t call them bitches) named Skye and Everest. And Cozy is obsessed with them. She named her cat Skye and she has Everest socks. The patrol is led by a male (Chase), so we’re going to have to have a little Paw Patrol talk. “Wouldn’t the Patrol get more done if Skye took over?”

She recently discovered the Little Einstein cartoon series. It’s another gang led by a (white) boy. These four kids fly around in their rocket, and have adventures based in famous works of art and classical music. It’s pretty cool, actually. There’s an episode based on on Strauss’ “Blue Danube Waltz” and Warhol’s Fish painting. My kid is humming Bizet and talking about Van Gogh’s Starry Night. Her favorite character is June, the dancer, and Cozy will dance to some Edvard Grieg like she was auditioning for the Bolshoi. I love my classical music-loving kid! 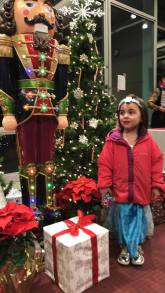 I think seeing the Nutcracker last month was a turning point in her gendered idea of herself. It wasn’t the Nutcracker, or the Rat King that ignited her. It was the Sugar Plum Fairy. She just started glowing when the SPF tiptoed onto the stage. It reminded me of when I saw Elvis Presley in concert at age 9. “That looks like a good job,” I remember thinking. Cozy got to meet the ballerina who performed the role after the show and she was hooked. Now she is constantly dancing in her own ballet for one in a way that’s making us think she might actually be a natural at this. It’s feminine and flowing. How did this happen and how much are ballet lessons? And can she be a ballet dancer and community organizer at the same time?

I recently asked Cozy if she thought there was a difference between boys and girls. She told me that girls can jump higher and then started talking about the difference between kids and grown-ups. I think that’s still the main binary in her head. She still mixes up “she” and “he,” and I purposely don’t correct her. She’s “gender-fluid” on her own but suddenly really cares about being “beautiful.” Maybe it’s just a phase and by this summer she’ll want to be a basketball player. But at the moment, there is very pretty ballerina dancing in our living room. 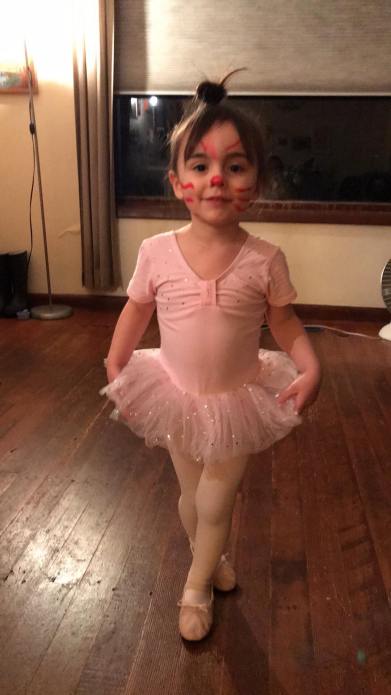 GENDER – Nature vs. Nurture 6: Fierce Fashionistia in a Fiercer World

GENDER – Nature vs. Nurture: Round 1