There’s only so much space in our queen-sized bed and as our daughter gets bigger, the little queen annexes more territory. Cozy’s history as a co-sleeper has not yet ended. She started life swaddled in a cradle next to our bed and then Baby C just moved into the bed. But then it was off to the crib and a room of one’s own. Then she did a stint on the couch in her room and finally her own bed. Bedtime for Miss Bonzo with a few books read, the lava lamp on, and the dreaded Mickey Mouse Fun House CD on play. Good night, sweet child of mine.

But there’s a plot a foot. Do we have our marital bed back? Is there the hope of the return of mornings rolling in the sheets? Can I have a chance to stretch out like Abe Lincoln as the sun rises on the new day? Nope. She’s back in our bed. Like a thief in the night, she creeps back in (with a posse of stuffed animals), often waking me up by putting her hand over my morning breath. We never hear her enter. We never feel her climb under the covers. She’s just there. It’s kinda creepy. Cute but creepy. I reach out to sleepily put my arms around my wife and there’s a 4-year-old in her place. 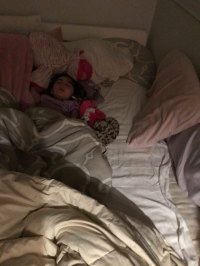 Because Cozy has moved past the princess problem by just assuming her role as queen, she demands the majority of space in the bed. Which means I wake up each morning pushed up against the wall. That’s my space. When I bought this house in 1999 it seemed so huge, too much space for one guy. Now I have a little space against a wall. “Up against the wall, Daddy, I’m trying to sleep.” The ladies rule this house. I have a drawer and this space against the wall and that’s just fine.

I tried to talk to Cozy about the situation and that she was a big girl now who should wake up every morning in her own bed. She then said, “I want you to understand how much I love you. That’s why I climb into bed with you every night.” What could I say to that? The truth is that the rare night that she stays in her own bed, I wake up in a panic. Where is she?  Did she leave home in the middle of the night? Oh, she’s just asleep her bed. I love seeing her beatific face first thing in the morning, even it is from my tiny space, smushed up against the wall.

There’s a lot of mixed information out there about co-sleeping. It makes sense that older kids who co-sleep probably are less self-reliant and may develop attachment issues. And parents need time away from even the most cuddly child. But what about the kids who creep in at 5 am? I don’t have the heart to ban her from her late night epic journey across the hall. Would that lower or increase her anxiety level? I feel like we might be front-landing issues for her therapy sessions later this century.

But for now, I’ll just be crammed against the wall. Let the queen have her way. 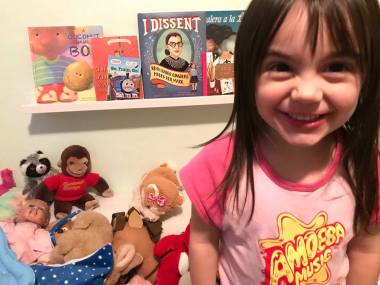 4 thoughts on “I’ve been given a small space, against the wall”