December 8th is always a rough day, marking another year without John Lennon in the world. A 78-year-old Lennon would be pretty cool but he will never be more than 40, the age he was when he was shot by a “New York gunman” who happened to be from the Georgia town next to mine. That moment is forever frozen, just like December 7th is for another generation. I remember making a vow on December 9, 1980 that I would never laugh again as a silent protest against the insanity of taking this sage out of the world.

I did laugh again, a lot. And tried to keep the messages of the forever-young Beatle in the front of my head. This blog is inspired by him and named after his song I heard on 96 Rock that morning the moment I realized that he was actually dead. For the billions on earth born after the night he died in the back of police car on its way to Manhattan’s Roosevelt Hospital (that includes my wife and daughter), the ghost of John Lennon is omnipresent. Just ask Cozy to sing a few lines of “I am the Walrus.”

What attracted me to John Lennon as teenager was his wisdom, born of pain. I would read every interview with him I could get my hands on and dissected song lyrics for glimpses of directions for my own confused life. His final album, Double Fantasy, released three weeks before his murder, was full of useful tidbits. I didn’t immediately connect with it because it was the songs of a 40-year-old bouncing off 16-year-old ear drums (although I did love the weird new wavey Yoko songs that were closer to the B-52’s than the Beatles).

Now that I’m a father, I understand the wisdom, and ultimate heartbreak, of that 1980 album. Cozy is now the age John’s son, Sean, was when he started recording the tracks for Double Fantasy. This includes the song for Sean, “Beautiful Boy.” In it John is filled with the deep optimism that comes with parenthood. “Every day in every way, it’s getting better and better.” And the pure thrill of seeing the world through your child’s eyes. “I can hardly wait to see you come of age. But I guess we’ll both just have to be patient ‘cause it’s a long way to go.” Three weeks after the world first heard that song Sean would have his father stollen from him. 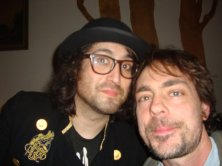 I’ve met Sean a few times and I always want to just give him a hug. His memories of his father are from the perspective of a pre-schooler. There was never a Father John teaching him an E chord on the guitar or nervously explaining the difference between (all you need is) love and sex. His John Lennon is the one shared with the rest of humanity. While it’s the natural order that parents die before their children, it shouldn’t happen that quickly.

The day just has me reflecting on how I really want to stick around as long as possible to give Cozy the maximum guidance, protection, and exposure to my sick living-room dance routines. As an older parent, I might not make her 30th birthday party and hope I can be there for her college graduation. (The good/bad news is that Blazaks tend to live a long time.) I have to make this time matter because I might not be around to clean up any messes later. When I think about serious risks to me (I have been known to jump out planes and mouth off in biker bars), now the thoughts immediately go to my daughter. I don’t that Nazi to kill me, not because it will hurt, because who will explain to Cozy the dangers of mall jazz and boys who think they are all that? I mean, seriously.

The tragic end of John Lennon reminds me of how we are all here such a short time and do not control when our exit date might be. The rumor was that John was planning a tour in 1981 and I would have been in the front row. It didn’t happen but he made the absolute most of his 40 years. Each stage was focused on making his world a bit better, whether opposing a war or just making bread. That’s the best thing you can give your child, no matter how long you last in this world.

However far we travel

Wherever we may roam

The center of the circle

Will always be our home