When will it end? After Columbine. After Sandy Hook. After Las Vegas. After Parkland. After El Paso. #YOURCITYHEREstrong 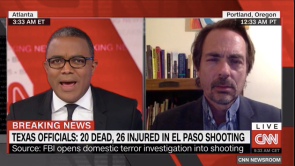 I was preparing for an interview on CNN about the slaughter in El Paso when the news broke about another shooting in Dayton, Ohio. Another white male with a gun and the weekend body count climbs. Imagine if all these victims had been killed by someone shouting “Allah Akbar!” There’d be some action taken then. But when it’s a white guy, hey it must be the fault of video games or Satan or something.

I’ve been writing about mass shootings since the 1990s. My co-authored 2000 book, Renegade Kids, Suburban Outlaws, took on the wave of school shootings that ended the twentieth century. Since then I’ve written about the topic ad nauseam, including the specter of right-wing violence that was likely behind the kill zones in both El Paso and Dayton.

I’m so weary. There is a void in leadership. Trump is propped up by the gun lobby and his white nationalist base that not so silently cheers the slaughter of innocents. There must be a parallel universe America where Trump and Moscow Mitch McConnell are hung for sedition and the leadership of the NRA is put on trial for war crimes. But having to stomach another wave of these assholes’ “thoughts and prayers” circle jerk is no longer possible. These are your people, Trump. Tell them to stop and say it like you fucking mean it. WASPs demand that Muslim people disavow Islamic terrorism every single day. I want every freakin’ white man to tell these shooters to stop and I want to hear them do it constantly, 24-7-365. Wake up out of your sleep and tell these white men to stop killing us!

Here’s where “great” America is now. I know that if I take my family to the movies, to the park, to the mall, to a house of worship, or to any school, there’s a chance a white male, angry at the world over some perceived loss of some perceived right, may kill them in front of my eyes. Because my family is brown, I know that elevates the chance they will be ripped to shreds by some human turd who hangs out on 8chan reposting articles about the “white genocide.”

This is the reality. I’m at a show and I’m keeping my eye on the exits in case the shooter comes in from the back. When my Mexican wife is teaching her students how to conjugate verbs in Spanish, I wonder if some fan of the president is going to come in, screaming, “Go back to where you came from!” and spray the class with his moronic rage, slicing her in half with “legally bought” ammunition. When I drop my daughter off at school, I wonder if some young man, inspired by the Sandy Hook shooter and his soft targets, will go for the “Fuck the World” glory and I’ll have to identify my precious child from all her friends at the morgue. Isn’t America great?

Here’s my promise. Any candidate that promises to use every tool legally available to shut down the NRA and the terrorists in the gun lobby has my full support. I don’t care if it’s Marianne “Huh?” Williamson. It’s sure not Joe Biden. I know the ice caps are melting and people are tweaked on opioids, but bullets are flying in God’s houses and the people’s streets. I’m not a fan of binaries, but it’s time to draw the line. Which side are you on? If you are not acting to defend my family from gun violence, you are in bed with the terrorists who want to destroy our basic right to safety.

I’m so tired of writing about this. I’m tired of our complacency and our stupid hashtags. I’m writing a manifesto of love, but if you aren’t onboard to stop these white men from killing families like mine, don’t expect much love from me.

2 thoughts on “Your loved one was just killed by an angry white man with a gun. OK?”