There are a lot things they don’t tell you about being a new parent. Everybody talks about the sleep thing (so true). What nobody talks about is what happens to your sex life. You’re going full speed in baby-making and then comes the wild and wooly world of pregnancy sex. (I think that’s what Beyoncé meant when she sang, “Bow down, bitches.”) And then screeeeech! Where is THAT movie?

The first two months must be the roughest. You’ve got a baby that wakes up every few hours and screams for mama’s breasts, which, all of sudden, have a new purpose on earth, dammit. And of course the vagina needs some time to recover from a 1-week late kid climbing out of it. That can open up some exciting alternatives if it weren’t for said baby wailing constantly and filling her diaper with sticky poo that requires numerous wipe downs each time. Kinda kills the mood. The bed becomes a sacred place for a few minutes of sleep and only sleep.

Of course, dear sacred mother is dealing with the fact that her body is transformed after 9 months of cooking the kid in oven. Us Magazine will tell you that celebrities get their pre-baby body back in weeks, with the help of a shit-load of airbrushing. Real-world mom has to compare herself to fake supermodel mom and suddenly the lights are off and the culturally produced shame is on. (Personally speaking, I think the post-baby belly is awesome. It’s what the Elizabethans called the “silken layer” and that’s where you will find my hands.)

Once things get settled, the question becomes where to have sex. If the baby is not in eyesight, there is constant fear something might happen. OK, baby is taking a nap in the swing in the living room, let’s shove the binkies and the breast pump off the bed and get busy! Wait, is she still breathing? What if she falls out of the swing? Somebody could grab her! And… we’re done.

In most tribal cultures people just have sex in front of their kids. Everybody lives in the same hut. It’s not like you can send your kid for a sleep-over to the hut down the road. Christopher Columbus remarked on his first trip to the “New” World about how the savages demonstrated none of the decent Catholic guilt around sex and were just out doing it like animals on the TLC channel. That may be a rational option now, but you have to think a knock is coming from Child and Family Services and you’ll have a registered sex offender sign in front of your house. (Has this actually ever happened?)

So the option of having sex with the baby in the room becomes very real and, not surprisingly, is a hot topic for internet discussions. (Apparently, it won’t turn your child into a pervert.) But the logistics of it are a bit different. Where should the baby be? Cozy sleeps in our bed. How do we not wake her? I guess the role play where I’m 49’er panning for gold and screaming “Yeehaw!” is off the table. And what if she wakes up?

Whenever I look at my baby, I’m filled with overwhelming love. But’s not the kind of love you feel when Marvin Gaye is playing. It’s parent love and it warm a smushy and filled with hope and will kill a boner like THAT. Sex requires focus. (Unless you are a guy and trying to prolong things by thinking about taxes. Holla!) The worst is when you are In flagrante and suddenly baby opens her eyes. Elf on the shelf. 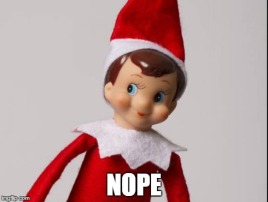 I don’t really know how this Elf on a Shelf thing became so big, but there is increasing debate about it. Some sociologists have argued that it prepares kids for an Orwellian surveillance state by reporting their misdeeds back to Santa. The elf is always watching. Well, your baby is always watching, too! And she’s reporting to the mothership of her future subconscious. If papa is slapping mama on the ass and whispering, “Who’s your daddy?” you don’t think baby elf is filing that away for a future therapy session, and making a copy for DHS?

This jujitsu kick the balls of sex-life has to be a temporary thing, right? I mean there is a crib in the other room waiting for this kid to move into and take up residence. We won’t have to worry about Cindy Lou Who waddling in and asking why mommy and daddy are Roman-Greco wrestling? Right? Maybe second babies really do come from storks.

I’m sure there is a culture where they have babysitters that magically appear when parents want to have sex. Japan seems like a likely, bet. But for the rest of us, who have a baby elf staring at us, it’s just going to have to be a little tribal for a while. Don’t tell Santa.

3 thoughts on “Sex with Elf on the Shelf”