Before you get on the horn to DHSS, there is a difference between sensual and sexual. If fact, as I’ve written about before, being a parent can really interrupt the sexual. We’ve come to refer to our wonderful daughter as the “great cock blocker,” as we reminisce about the good old days when we were crazed weasels who, well, you can guess. All the time.

There’s still weasel action but there is also this other thing. Someday I will write about the increase in connection with a person you’ve had a child with, but this is the trickier area of the relationship between father and child. I was thinking about what to write about today when Cozy, now 17 months, started stroking my hair. I don’t know if she was doing it to be nice to her stressed-out dad or she was assessing how much conditioner I needed, but it felt nice. And I realized how many moments we have like that. Moments where we just snuggle or give kisses or just look into each other’s eyes and I wonder how bizarre it is that I’ve played a role in the existence of this beautiful creature.

It shouldn’t be creepy to be routinely humbled by how soft baby skin is. It’s like as if there was a freaking baby panda that was actually a cloud. I feel like like a chewed up piece of 80 grit sandpaper compared to even the bottom of her feet. There’s a whole industrial machine that sells “baby soft” products, but they can’t even approach my baby’s bottom. Since much of the time is spent holding or changing my daughter there’s a lot of skin to skin contact. Sometimes that’s depressing (“Honey, your father is not the Crypt Keeper, he just grew up in Georgia.”) but often it’s awe inspiring. Did we all start off so perfect and unblemished?

My ethnic heritage on my father’s side is Czech. Czechs tend to be moley people. Cozy was born this wonderful Czech-Mex mix. Her blue eyes turned brown after about a week. And a week after that she got a little mole on her butt. It just appeared like a message from my ancestors. Every time I change her, I’m reminded of that genetic line. Also when she runs around the house bottomless. Hey, sometimes you’ve gotta air your business out.

I grew up in a weird time and space, the South in the 1970s. On one hand it was the Bible Belt so there were plenty of people who thought bodies were dirty things to be covered (because of that bitch, Eve). On the other hand, it was the height of sexual liberation and people were walking around their homes naked with copies of Playboy and Our Bodies, Our Selves on the coffee table. (My parents were from Ohio and midwesterners just ignore anything sexual.) I have to think those mixed messages didn’t do the psyche of my generation any good. 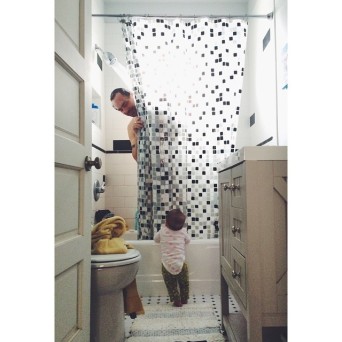 Cozy bathes with her parents fairly regularly. She and I had a shower together this morning. It’s really just a way to be efficient. I can watch her if she’s in the tub with me and we can save water on the probably much-needed booty hose down. It is perfectly innocent but I am aware there are some very uptight people who would see it as inappropriate. I know at some point one of us will grow out it, but it’s a nice thing we share. I’ve got friends that showered with their kids into the double digits (in Georgia!), so maybe I’m too worried about the Bible thumpers and their cousins in ISIS.

It is funny when she waddles into the bathroom when I’m standing there peeing. She has this confused look on her face as she tries to figure out what my penis is. I always feel uncomfortable and sing this little song I made up.

What are you looking at Baby B?

What are you looking at, what do you see?

You better not be looking at my pee pee.

You can’t not have an intimate relationship with a child after you’ve changed thousands of diapers. I know her vagina better than I know most of my family members. And that thing is as clean as a field hockey coach’s whistle. (Wait, that sounds rather dirty.) As a stay-at-home dad, I am the primary agent of her undercarriage management. I often joke that I am on “Butthole Patrol,” because you don’t want to let a kid sit in a dirty diaper too long or you’re gonna need a power sprayer to do the job. (How I envy the French and their clever bidets.) As much as I want the kiddie potty to take over my job, their is something bonding about the diaper change ritual. Eye contact and mutual trust, and a song from dad. (This week it’s been David Bowie’s “Ashes to Ashes.”)

Freud, Foucault and Judith Butler all have written about the psychic damage done to boys who have to be weened from their mothers and switch their identification to their fathers. In this new age of stay-at-home dads there is the interesting question about daughters who have similar intimate connection to their fathers. How will Cozy’s psycho-sexual identity be affected by all this time we spend together, including the showers and diaper changes? Perhaps not at all, or perhaps she’ll have a solid sense of self that is not defined by one idea of gender or genders.

I do know it has affected me. Besides the protective “papa bear” mandate it fuels, I also feel more like an actual human being. This is a true connection between two people. She might not remember any of it, but I’ll never forget any of it. Before I put her to bed, we have a little dance to some soft music and she puts her head on my shoulder and I make a wish that this dance never ends.

4 thoughts on “I’m in charge of your butthole: The intimate world of parenting”