If babies could all have a bumpersticker on their rubber baby buggy bumpers, it would say, “If it feels good, do it.” We’re all born these raging Freudian ids who just want it now. Honestly, babies are selfish little beasts. They don’t care if it’s the middle of the night, they want the tit! They don’t care if you have a weak stomach, they want that WTF poop wiped out of their crack!

If babies weren’t so cute, it might be easier to put tape on their mouths. They have no concept of delayed gratification. I was just getting ready to feed Cozy but the bottle was too warm. The problem was she could see it setting on the dresser to cool. She flipped out. “Give me that damn bottle! Baby needs a hit!” She was fixated and I could feel the hate directed at me. “Stop fucking with me, Dad!”

I tried to explain to her that the anticipation is the best part. Christmas Day sucks compared to the lead up, right? By 3 pm on December 25th you just feel deflated. When it’s over, it’s just a memory. When I went off to college my big act of independence was to get a subscription to Playboy magazine. (Sorry.) Very quickly it was clear that the best part of the magazine was the anticipation  of receiving it, not actually “reading” it. In fact, my favorite part of the magazine was the last page that let you know who was going to be interviewed (and naked) in the next issue.

I’m sure I will discuss the Playboy thing in some post. That subscription is decades gone (but my Beatlefan subscription has been uninterrupted since 1984). I now look forward to my Voice Male magazine, but I actually read those from cover to cover.

When I first moved to Portland I was volunteering in a residential facility for juvenile offenders. One night I was sitting around with a half dozen teenage car thieves and gang bangers, showing them my Spiderman Pez dispenser. They had never seen Pez! (Obviously why they became cruddy JDs.) I explained to them how you take the candy out of the foil and load it into the dispenser (as one candy lodged in sideways). 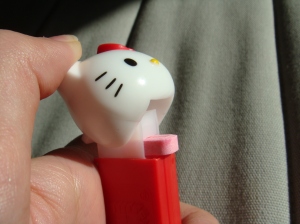 “Why don’t you just eat the candy?” one kid asked. Good question, I thought. “Because you get to put in the dispenser and make each piece pop out of Spiderman’s neck.” It didn’t seem like a very satisfying answer. I mean, think about it. Maybe that was “fun” in 1975, but these kids had Xbox.

In that moment I saw the importance of Pez and metaphor for delayed gratification in our culture. These kids were essentially babies. If it felt good, they did it. And since they were boys, that included violence and criminality.

So the challenge is to make Cozy wait, but to enjoy the waiting. To sit in the moment and anticipate what’s to arrive; a bottle of milk, a birthday present, a bachelor’s degree in pottery. Tom Petty once sang, “the waiting is the hardest part,” but sometimes it’s the best part.

She doesn’t get it at the moment at only 4 1/2 months old, so I’m still OK to spoil her. I’ll get this lesson started later. And enjoy the anticipation.

3 thoughts on “Parenting Advice from the Pez”