I’ve learned that you need three things if you have a two-year-old. You need plenty of rags, a subscription to Netflix (for Beat Bugs), and lots of drugs. Lots of drugs if you want to survive even a day. My drug of choice is caffeine, but I’m in the market for something more appropriate for my needs as a stay-at-home dad.

The first order of business in the morning, before I can even look my daughter in the face, is to get the pot dripping the black gold. Lately, my dealer has been a Portland roaster called Kobos. Their Ethiopia Yirgacheffe blend is like a spike in to my vein.I pour that first cup, half of it spills on the kitchen floor and I don’t even care. I’ll keep the java flowing through her breakfast in a high chair (with Cheerios hitting the kitchen floor in a Portland version of the fountain show at Bellagio), and the trip to take Mom into work. On good days, we’ll drive-through Starbucks on the way, where I’ll beg them not to put a plastic stopper in my latte and pray that no Stumptown Coffee loyalists spot me crouched behind the steering wheel like a junkie cheating on his supplier.

When the coffee pot is empty there’s always another on deck. And it tends to go quick. I think Cozy is stealing slurps from my Star Trek Enterprise mug when I’m not looking. It’s my fault. When she was a baby, I’d let her smell everything at the grocery store as we shopped, including the dark roast beans. Now, instead of screaming, “Cilantro!” she yells. “Coffee!” It’s really quite cute/embarrassing.

In the beginning, it was out of necessity. Everyone knows new parents don’t get much sleep. When I was a punk rock teenager, we used to get coffee at an all-night diner in Atlanta called The Majestic, just to come down from a night of terrorizing the city. Same thing with a newborn. But it changed when Cozy turned two. Last August, about a week after her birthday she had a meltdown in the Mexico City airport. She wasn’t going anywhere. I remember thinking, “I need something stronger.” As Huey Lewis once horribly sang, “I want a new drug.”

Just the “Do you need to poop or not?” question is enough to put me on prescription pain meds.

So I’m open to suggestions.

I know five states are voting on recreational marijuana on Election Day. We’ve had that here in Oregon since last year and it’s been a huge success. I’m not much of a pot smoker but I went to my neighborhood weed shop and bought a bag just because I could. On the way home, I waved it at a cop and he just smiled. Edibles are more fun, but pot generally makes me sleepy and I wanna be ready if I have to do some kiddie CPR or find her always lost copy of The Cat in the Hat. Plus, I’m working off the baby weight and don’t need to be spending my days with the munchies, eating blocks of cheese or the corners off of The Cat in the Hat (Cozy’s already done that).

Methamphetamine seems more practical than heroin or LSD. There’s never enough time in the day to get the chores done and I’ve heard speed freaks have super clean houses. That might be because they’ve sold everything off. (Has anybody told people on that show Hoarders about this?) But I’m kinda vain and would like to keep as much hair on my head and as many teeth in my mouth as possible. On the plus side, we could probably cancel the diaper service because I would be washing them out myself, probably on our front porch in my underwear.

It seems like ecstasy makes the most sense. The Love Drug. You just want to give free hugs when you’re on X. But then I think I’m already on it. There is some endorphin wave that seeps out my brainstem into my entire body whenever I look at my daughter. Yesterday a worker at the gym asked her, “So what’s your name?” And she answered, “Cozy!” It was the first time she ever said she was her name. I melted in a puddle and could barely climb on the elliptical machine afterwards. When I put her to sleep we just lay on the floor, face to face, staring at each other. She smiles and I feel like I’m living in a psychedelic cartoon; the end of Yellow Submarine when the Blue Meanies have been defeated. “Beatles?” she’ll quietly ask. I exist on a plane of perfection. 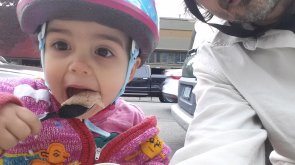 Maybe my daughter is the only drug I need. I know if either of us are down, there’s one word that brings things up. “Bubbles?” And if either of us are stressed out, we have total permission to shout, “ice cream!” and walk up to Salt & Straw for a cup of Chocolate Gooey Brownie. When it’s time to chill, “Hey Jude” always does the trick. She whispers the na-na-na-na-na-na-na part. And I’m high as a kite.

I hope you don’t mind if I bogart this kid.

3 thoughts on “What drugs go well with a toddler?”