The second edition of my 2011 novel, The Mission of the Sacred Heart, just came out so I thought I’d write a little about the hell of writing it just in case you had a tortured artist on your gift-giving list.

The twentieth century ended not with a bang but a whimper. I was in the throes of a classic Randy heartbreak. (I hadn’t yet accurately identified the pattern or the appropriate response.) I was going through a divorce with a woman I had met in a poetry reading in Augusta, Georgia. We got married after the Atlanta Olympics and I brought her to Portland, mistakenly thinking that I was ready to be in a partnership and that she was ready to settle down.

I tried to comfort myself with the idea that it was just a “starter marriage” (A Gen X hot topic at the time), but there was a trip to Cannon Beach with the thought of hurling myself off an appropriately dramatic cliff. Long story short, I didn’t, but got into therapy and got on an anti-depressant called Zoloft. There was other suicidal behavior in my family so I began to wonder what that impulse was about and, more importantly, what was it that stopped most of us from actually doing it.

Since I had been pretty successful as a spoken word artist in Atlanta, I thought it was time to write something longer than a poem. It was musician Susanna Hoffs of the Bangles who had given me a copy of Sophie’s Choice to encourage me to follow my fantasy of becoming a writer. Now I had the start of an idea for what might be an important book – Why is it so hard to kill yourself?

It’s not a rock opera

Someday I’ll write a whole thing about the joys of locking yourself in the room in the days before the internet and even MTV and listening to record albums. Suffice it to say, I did it a lot in the 1970s. When I was 13, one of my favorite albums was A New World Record by the Electric Light Orchestra. For those out of the loop, ELO’s schtick was that they played rock music with a string section (like how Chicago had a brass section). Very Beatle-inspired pop that infected the airwaves. This album had songs with compelling characters, like opera singers and a guy on a telephone and an alien, and a mother on a corner with a baby.

When I got a CD version of the album 20 years later I realized it was just a bunch of songs, not a concept album. But then I thought, “What if someone were to write the story I first heard all those years ago? It could be a rock novel!” Adding a few contemporary themes, like homeless youth and turn-of-the century-depression, and you have a new genre!

Late night on the iMac

Between preparing lectures, going to shows, occasionally sobbing, and inhabiting Portland dive bars like I was Sinatra with an ungodly thirst for Jack Daniels, I’d write away. I was translating my funk and the world it existed in, trying to find the answer to this question. The ELO album played over and over as I used it as a template for my story about a small group of Portland creatives, a gutter punk with a baby and a dude who may or may not be an alien. I’d bash away at my aqua iMac as I lived with these people; Zak, Lenny, Cozy, Telly, and Lucinda.

By the last chapter, I had the answer. Why we hold on. And a wonderful story about the power of music to move us through the tar pits of our lives. On December 31, 1999, I took a draft of the manuscript into the desert at the Warm Springs reservation and read it as the sun set on the century. I burned the pages to keep warm and hoped my hard drive back in Portland was safe from the Y2K bug.

It was really the writing of it that saved me. During that period I also co-authored a great book on suburban delinquency, bought a house, weened myself off the Zoloft, and took a visiting professorship at Emory University. I suddenly didn’t need the book, until I did again. That’s when I self-published it in 2011. It’s done pretty well, getting some amazing attention, and now it’s been optioned by a screenwriter in Hollywood for a future film project. And it all came out of a moment when I thought there might be something better to do than throw myself into the sea because my heart got beat up.

Why we stick around

The answer that I reached on the last page of The Mission of the Sacred Heart is that we stick around to see how things turn out. In our deepest moments of sorrow, sometimes it’s hard to see the countless moments of joy and lay ahead of us. If I had jumped I would have missed so many blissful moments; drives across the country, being inches away from Patti Smith as she sang “Gloria,” seeing Andrea walk into a room for the first time, hearing Cozy say, “I need to poop,” and more to come. Why walk out before the movie ends? Even Speed 2 had a pretty cool ending.

The sequel to Mission, The Dream Police, is now out and getting a positive response. I thought it was time to clean Mission up a bit, fix the cover, and take out a few less evolved terms in the story. (Sorry history, “retarded weathermen” and “big boobed Asians,” as funny as they sounded, have been revised.) Mission had an important impact on some folks who were going through the same thing I was, so it has served its purpose, but it’s still a timeless story about those moments and how we survive them with the power of a good song.

I’m not intending to write a trilogy. The Dream Police may be the last time we see Lenny, Zak, and Cozy. But who knows? I just want to get these books to people so they can be as good friends to them as they were to me.

The Mission of the Sacred Heart is available here on Amazon and Amazon Kindle. 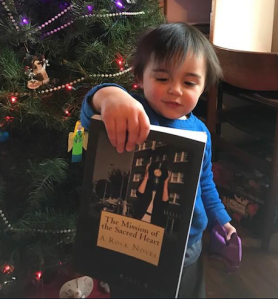 5 thoughts on “Writing to Live: The birth of the “rock novel””