In this holiday season, I’m looking for silver bells and silver linings. Barring a half dozen dead hookers being found in a closet in Trump Tower, this practical joke on America is going to be sworn in as president on January 20th. The educator in me wants to figure out how this is a “teachable moment.” How can we glean some value from watching the United States jump the shark? 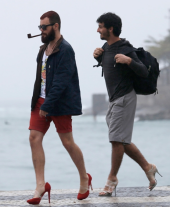 As a feminist scholar, there’s a game I play in the classroom when trying to reveal the nature of cultural power imbalances. It’s called, “Put the Stiletto on the Other Foot.” If you want to find out of something might be sexist, flip the sexes and see how plausible it might be. Would there be much a debate about abortion if men got pregnant? What if men were evaluated primarily on their looks instead of their acts? Hey, how about if sorority houses were known for sexually assaulting male students? What if all the men in congress dyed their grey hair and the women in congress didn’t? We could go on and on.

The point is that there’s an ancient Affirmative Action program called patriarchy that gives men a lot more latitude for bad behavior. Just like our black president had to be the perfect scandal-free executive and it still wasn’t enough, women have to meet a standard far above their male colleagues. On the surface, there should have been no choice between an overly-qualified states-person and a ham-fisted, morally challenged (at best) buffoon. But one was female and held to a completely different and unrealistic standard. Welcome to the world of women.

So, for the next four years, every time Trump gets a pass at something that Hillary Clinton (or any other woman, for that matter) would have been raked over the coals for, let’s all shout, “There’s the gender card!”

Much was written during the campaign about the sexist double standard in evaluating the candidates. This includes Trump’s countless and daily (hourly?) lies while castigating everyone else as a liar. “Lyin’ Ted,” “Crooked Hillary.” How did he pull it off? If she called him on his shit, she was instantly labeled a “bitch.” It was a no-win situation, invented long before Mr. Trump came along. Smile, honey, but not too much.

The campaign is over. The Russians, I mean, Trump won. But the shit show is just starting. The bar for both Donald and Melania has been dropped to the sub-basement by the droogs that voted for him and continued to support him even after he told them to their faces that 90% of what he said at his rallies was complete bullshit. “Yeah! Huh? Yeah! Drain the swamp!”

The Stiletto on the Other Foot game has lots of other applications, race being the most obvious one. This time imagine if Obama had five kids with three different women and bragged about sexually assaulting women and then tried to write it off as “locker talk.” These mental games often allow folks to get creative. There’s a clever 1995 film called White Man’s Burden, starring Harry Belafonte and John Travolta. It imagines an alternative America where black and white positions in society are switched. The movie bombed. Just too much to process I guess.

I’ve been thinking lately what would being said right now if Trump was Jewish. With all his “conflicts of interests,” pay-for-play tactics, insider trading positioning, and cabinet filled with Goldman Sachs loyalists, he would be viewed as the worst stereotype of the Jew. As it is, his neo-Nazi (alt-right) followers haven’t even noticed. It’s good to be the king!

I imagine we’ll have a chance to play this game every day for the next four years (unless he quits because people stop believing his “just trust me” mantra). The silver lining here is that it should awake a whole new generation of feminists who start telling the men in their lives, “Don’t think you can get away with it just because Trump can.” Then the next question should be, “And why can he get away with it if you can’t?” Donald Trump is the poster boy for white male privilege and he’s going to exalt that to his dying day. He’s clueless. His presidency will do more to discredit unchecked male power than all the Women’s Studies classes in the world. 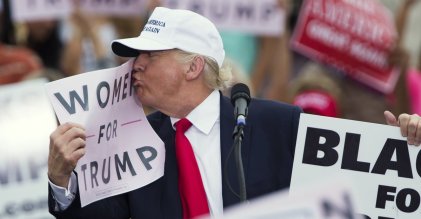