Other than Donald Trump, does anybody truly like the sound of their own voice? Mine makes me cringe when I hear recordings of it. I feel for the thousands of the students who have had to listen to me over the years. But I do love to talk and maybe my jabber has some value in the world. Those students got a lot of stories from my weird life to illustrate points, hopefully finding applications in their own stories. Maybe I should keep talking.

The reason for talking is that I’m an asshole. But I’m trying to get better. I was featured in a front page interview in yesterday’s Oregonian newspaper. I casually chatted with the reporter about all things related to racism in Oregon. I assumed this was background research for a larger story, but it was an actual interview. I was trying to make the case that institutions are changing from the inside and said, “I’m the last person in the world that says human resource ladies are giving us hope in the world, but they are a reflection of how much institutional change has happened. Every HR department has an equity and diversity department now.”

I was trying to make a joke about the stereotype of people who work in Human Resources offices and how they are, in fact, agents of change. In print it fell flat. I just looked like an asshole and the online commenters sunk their teeth into my quip. I could’ve gotten defensive, bleating, “It was just a joke!” but I’m in recovery and that means taking responsibility for my mistakes.

There are two types of people in the world, (I love it when people bisect humanity like that) assholes and people who know they are assholes and are trying to not be. I’m trying to be in the latter category and that requires more listening than talking. So why am I starting a podcast about my privilege? Shouldn’t I shut my privileged mouth up?

Privilege is such a dirty word in our culture. Everybody’s “worked hard” for whatever they have. Try telling a white guy who is homeless that he has white privilege and male privilege. It might be a hard sell. But he does. Devah Pager’s profound 2003 study, “The Mark of the Criminal Record,” found that African-Americans without criminal records faced more job discrimination than whites with criminal records. For years I assigned Peggy McIntosh’s “White Privilege Unpacking the Invisible Knapsack” to my Intro Sociology students. (“1. I can if I wish arrange to be in the company of people of my race most of the time.”) Most of them were smart enough to get it. Having an unearned privilege doesn’t make you a bad person. It just means the playing field that you walked on to is not even.

I had a trick that usually worked pretty well in the classroom. I’d ask the left-handed students to raise their hands. Then I’d have them testify to the multitude of advantages that right people have. Usually the right-handers would be a bit surprised. “Well, I never thought of that,” they’d grunt. Then I’d ask the righties how many had lefties in their life that they cared about. “Is it possible that there’s a similar dynamic with race or sexual orientation?” “Oh,” they’d grunt.

I’m right-handed.  And a white, cis-gendered, able-bodied, heterosexual, male, middle-class homeowner. I’m pretty damn privileged. Some days it doesn’t feel like it, but even on those days I am. If I ignore it or, even worse, deny it, I’m officially an asshole. So I thought I’d make my own recovery a public one. Growing up in Stone Mountain, Georgia (the birthplace of the modern KKK), I can recall some pretty racist moments in my life. I wrote a paper in high school titled, “If they have Black History Month, why can’t we have White History Month?” I was a product of my environment. Now I’m actively anti-racist, but I have to acknowledge there is racist residue (it’s sticky), and it is strongest when I deny my white privilege. 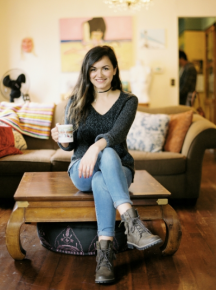 So I’m kicking off my first podcast, Recovering Asshole. I’m going to talk to people who don’t have privileges I enjoy. Maybe they can help me (and you) be a little less of a privileged asshole. In the wake of the Portland Max stabbings, I thought we’d tackle immigration first. It made sense to talk to my fabulous wife, Andrea Barrios, about her boarder crossing. In the spirit of John & Yoko, we did the interview in bed. It gave me a deeper appreciation for what she went to just to be in this country. I won’t discuss what happened after the interview. (Maybe I should launch Recovering Asshole: After Dark as a paid subscription podcast.)

We’re here on iTunes. Please subscribe. It’s free. And share. If you don’t have iTunes, you can find it on Soundcloud. Maybe we’ll get a sponsor. Maybe we’ll bring a bit of empathy into our lives. I know there are a ton of great conversations coming.

I’ve got lots of interviews lined up. We’re going to talk to Muslims, African-Americans, Trans people, gay parents, domestic violence survivors, and, yes, even left-handed people. I’m a podcast fan (Fabcast is my current favorite), so I think I know how to keep the listener engaged. My hope is that people who find Recovering Asshole with share it with their friends (especially the assholes) and it can grow into something that can have an impact.

We’re allowed to make mistakes on this journey. It’s not easy. I’m sorry if my comment about “HR ladies” came off as sexist. I’m using it as a moment of reflection. My tagline for the show is my tagline for life – We’re all works in progress, so let’s get to work. 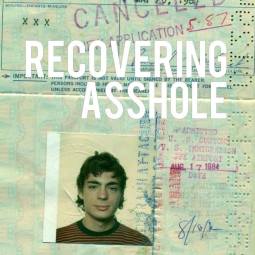 Join the discussion on the Recovering Asshole Facebook page.

9 thoughts on “It’s all a part of asshole recovery”