How do you talk people out of becoming terrorists? I’ve spent this week in the United Arab Emirates at a workshop on the role of gender in countering violent extremism. The three day conference in Abu Dhabi was sponsored by the United Nations’ UN Women and Hedayah, a UAE group that works on counter-terrorism issues. My role was to brief the global participants on the state of right-wing extremism in Trump’s America, something I’ve been talking a lot about lately.

It was a pretty amazing gathering at the Bab al Qasr Hotel, right across the street from the Emirates Palace. Three days of intense conversations with people doing work in Kosovo, Lebanon, Uganda, and the rest of the world afflicted by violence done by both men and women who have been sucked into the rabbit hole of extremism. I made friends and colleagues that will last a long time, but more importantly we saw how much of our work overlapped. My work studying white supremacists sounded a lot like the reports on ISIS and Boko Haram.

Extremists of any stripe, including right-wingers and jihadists, are often guilty of dehumanizing the targets of their anger. Similarly, we are often guilty of dehumanizing them, casting them as “animals” or “savages.” In reality, they are products of their environment on a path we rarely get to see. They often have real life grievances. It may be the evaporation of the livable wage in the U.S., or the death of family members in Iraq under U.S. bombs. Someone gives them a devil to blame and an action plan to address their emotional rage and you have a freshman terrorist.

In this context, it’s not a stretch to see a young person, who has been been bombarded online with images of real world horrors and persistent recruitment by radicals framing the horrors as the product of a vast conspiracy, heading off to join ISIS in Syria or walking into a black church in Charleston with a loaded gun.

The gender factor is clear, these calls to violence are targeted at young males looking to perform some heroic act of masculinity to defend their race or religion. While there are occasionally women warriors in both the Aryan and jihadist movements, it’s typically the guy with the gun defending “his” women. Women (in heaven or on Earth) are often used as lures like they are in college fraternities. ISIS fighters are promised wives, sex-slaves and 72 virgins in paradise. White nationalists are liberating “their” women from feminists, homosexuals, black rapists, work, and whatever else conspires to keep them out of the kitchen making sandwiches. 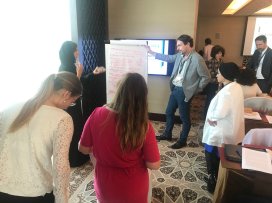 The three-dray conference in Abu Dhabi was a chance to share stories from across the globe about what might work in developing strategies to rescue men and women, and boys and girls from violet extremism. Former jihadists and academic researchers worked together brainstorming on action items that would translate into UN policy proposals. We dined together and then shared more stories and refined the plan to craft a message that was more than the trope that mothers should stop their sons from becoming terrorists.

Over the course of the workshop, I thought about my own daughter on the other side of the planet missing her daddy. If she was a girl living in Cameroon or Albania, her life could be so much different. Married off as a war bride or convinced to rebel against her circumstances by being talked into strapping a bomb to her chest. The way extremism affects girls like Cozy around the world adds yet another level of external trauma the daughters of this world consumed with hyper-masculine violence face. 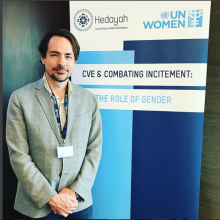 I could not be more proud to do this work countering violent extremism. It makes sense to be doing it in the middle east, but it should be done everywhere. The UAE, stuck between the war zones of Iraq and Yemen, has demonstrated how it is possible for a population not to go down that path. Each morning I looked out my window, past the Persian Gulf, to the cradle of civilization. This was the world of the goddess where the weapons of war were absent for 4000 years. Committed people are working to find our road back.