Here’s a depressing statistic; only 36% of Americans have a passport. I got my first U.S. passport at age 18 and have kept it current since 1982. You never know when you might need to get the hell out. But, in reality, you should get the hell out. America is not the world. In fact, the United States is only 6% of the Earth’s landmass. How much of the other 94% have you seen? 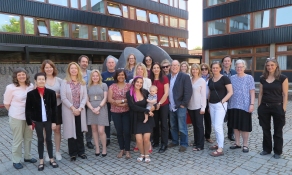 I’m in Oslo, Norway now attending another workshop on gender and extremism. (Suddenly, a hot topic it seems.) I spent a few weeks in Denmark in 1986, but this is my first time to Norway and it’s spectacular. Andrea came with me and we are enjoying the long days (Is it 10 pm or 4 pm? Who knows?) and the wonderful people of the vibrant socialist nation where everything seems to work perfectly. Beer, salmon, and discussions of feminist theories of violence with scholars from around the world. I can’t complain about much at the moment.

That my passport is getting a workout is beside the point. (Toronto is next.) Each time I’m taken out of my American comfort zone, I’m forced to grow a little. It could be just finding my way around a strange city like Oslo where all the street signs look like eye charts. “Get off the Metro at the Forskningsparken station.” It could be not knowing if I should eat the brown cheese (Brunost). Eat it! It could be wondering how expensive a 129 Kroner jazz album is. (I don’t know but I still bought it.) Bonus points if you have to figure out how a bidet works. Like an elder playing Soudoku to stave off the looming Alzheimers diagnosis, all this momentary discomfort is good for your brain, or at least your soul.

My first trip to Paris was when I was 20 and bumped into a small group of American girls on the Champs Elysees. We were all hungry and I suggested we go get a table at a sidewalk bistro and make fun of tourists. They went to Burger King instead. They came to the the City of Lights but were too intimidated to experience Paris. They went home to their Whoppers. Le Whopper. What did they miss because they went for the safety of the familiar? McDonalds around the world are chocked full of Americans who are afraid to sample the local cuisine. Maybe they should just stay home and watch the Travel Channel while they eat meatloaf on the couch.

I was at a Home Depot once and this white guy started complaining that all the signs were also in Spanish. “They’re still in English, too,” I told him. “Now you know that ‘plumbing’ is also ‘plomería.’ Be glad.” You better bet all those American tourists are pleased as punsj about all those signs that are in the local language AND English. Are they afraid they might have to work a little bit to figure things out, like most everybody else? Or are they “special” because they’re Americans? Aren’t they special?

It’s bad enough there is a Starbucks and a Foot Locker everywhere you go on this planet. It’s like a grand conspiracy to make Americans feel safe and unchallenged wherever they go in the world. Did you go to Morocco or just the Epcot Center version of Morocco and is there a difference? Pretty much everywhere you go, people will speak English and deliver Dominoes pizza. Globalization has done what colonialism only dreamed of – Made the world our Subway sandwich.

Sometimes it’s good to be out of your element. Know that comes out on your dinner plate might not look like what you expect. That surprise is for you! Know how to ask directions in the local tongue. I can ask how to find the toilet in seven languages. Kde je záchod? We don’t run the world so act like it. I was in a shop in London and this American, when hearing the price in pounds and pence, asked, “How much is that in real money?” It’s okay to show a little humility. The world will actually look on you with favor.

When you come down to it, you can find the familiar in the strange fairly easily.  Everybody everywhere is addicted to their phones. People all love coffee and chocolate.  Parents are all trying to keep and eye on their money and their kids. And everyone makes fun of how Swedes talk. It’s basic. So the little variations are where the action is. Here in Norway, businesses respond to the needs of families instead of the opposite, like in America. That’s pretty cool. I’m different for learning that. The record store is closed.

Go get lost. Get out of your comfort zone. You’ll be better for it.

3 thoughts on “Get out of your country!”

Visiting the memorial to the 22 killed at a Walmart in El Paso. America’s worst hate crime, committed by a Trump supporter in 2019. #vive_mexico #hatecrime #elpaso #cozyblazak ok
Damn Good Dad