One of the great twentieth century sociologists, C. Wright Mills, wrote in 1959 that we tend to see our biographies as separate from the moments in history that we live in. We focus on the, often mundane, day to day parts of our lives and not our lives as part of a larger historical moment. Very few of the people engaged in the vibrant protests in 1968 thought, “I’m in 1968, making history!” They might have thought, “I’m going to this protest with my friend and then I need to pick up some milk on the way home.” We are making history because every day we are making history by merely existing. But Karl Marx once wrote, “Men make their own history, but they do not make it as they please.” However, there are times, like now, where we can actually alter the course of events.

Portland is again at the epicenter of national events. The media from around the world (including China and Canada) has been calling me to ask what to make of federal forces shooting “non-lethal munitions” into the faces of protestors and grabbing them off the street in actions that look more like Argentina in 1980 than anything America could ever be. And now President Trump has ordered federal police into Chicago, Kansas City, and Albuquerque in what he has branded, “Operation Legend.” (I won’t psychoanalyze how that title fits Trump’s delusions of grandeur.) State and local leaders and well as senators and congress members have demanded the federal forces leave. Oregon Senior Senator Ron Wyden tweeted, “@realDonaldTrump get your jackbooted goons out of my city.”

The arrival of federal forces has completely altered the dynamic of the conflict. The protests had been geared towards Black Lives Matter and the systemic racial injustices that were highlighted by the May 25th murder of George Floyd. Even in Portland they were beginning to lose steam, as they had in Minneapolis, Washington, DC, and other cities. We were trying to move to a sponsored dialogue phase of the conflict. I was working with the Department of Justice on a plan to get protestors and Portland police to the table together. Then, in a bizarre attempt at political theater (and perhaps a distraction from the unending COVID-19 headlines), Trump sends in federal forces to throw a tanker full of gasoline on to the fire. If it was his actual intention to quell the protests, he failed miserably. People who have never engaged in protests are now manning the barricades; grandmothers, veterans, dads with leaf blowers, all willing to take volleys of CS gas to the face to make a stand. 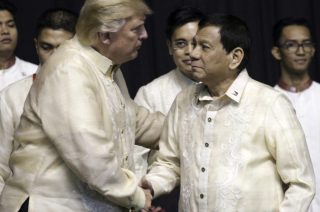 This is now about a lot more than Black Lives Mattering. This is about a shockingly rapid slide into authoritarianism. We don’t have go back 80 years to Germany, or even 40 years to Argentina. The parallel is the Philippines, where the 2016 election of “law and order” candidate Rodrigo Duterte turned the country into a police dictatorship in which the media are regularly imprisoned. In 2017, Donald Trump praised the dictator and invited him to the White House. The people who are protesting in America understand how fragile democracy is. The Philippines was a democracy. It is not one now. Those who mocked Antifa activists for warning about the threat of fascism in America are witnessing something that looks a lot more like fascism than it does democracy rooted in constitutional due process. When Fox New’s Chris Wallace asked Trump this week if he would accept the results of the election in November if he loses, his response was that he’ll “have to see.”

So here America is at a turning point. Will we move to civil war or an era of peacemaking and healing? Are the protestors who are risking their lives to drive the federal forces out of Portland lawless anarchists, American patriots, or both? My wife and I (who were tear-gassed at an earlier protest) have stayed up into the morning hours watching the nightly mayhem in a small area of the city, wondering what’s happening to this country. Whatever it is, it’s history unfolding before our eyes. You missed Tiananmen Square in Beijing in 1989 but you can show up to Chapman Square in Portland in 2020 for a front row seat for tomorrow’s American History textbook.

I’m lucky to have a wide range of friends that run the gamut from U.S. Attorney’s Office civil rights lawyers and police officers to members of the “Wall of Moms” and some of those “lawless anarchists.” I have to imagine all of us are aware that this is a true crossroads in U.S. history. It’s both exciting and frightening. It reminds me of the end of the Cold War and being in London clubs as newly freed eastern Europeans danced their asses off. But it could easily go the other way as Trump’s America continues to flirt with our most dystopian dark fantasies. Police riots and “law and order” rhetoric got Richard Nixon elected in 1968, extending the Vietnam War into the mid-70s, but I think America is in a different place in 2020. At least I hope so.

This is history. Future generations will debate what happened in America in 2020. This great transformation could be a wonderful act reconciliation or the death of America itself. Pay attention. You are not required to participate in this moment, but you are required to bear witness to it.

3 thoughts on ““I wish I was alive in 2020.” Witnessing History from the Frontline”