As a guy with a massive love of music but minimal musical talent, I’ve been lucky enough to get to hang around  musicians for most of my life. From local jammers to superheroes, like the guys in U2 and REM, I’ve had friends who know how to take a thought and turn it into a song that people want to sing. It’s a beautiful process. I’ve been working on a book called Mirror Star about some of these people and the excitement they’ve brought my life. But for now, I’ll just post this picture of me and Carrie Brownstein, of Sleater-Kinney, at the 2008 Obama rally in Portland. 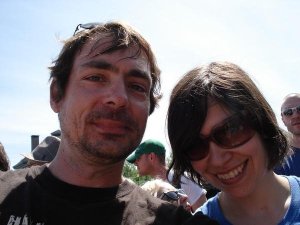 I’m on this topic because Cozy had her first backstage experience yesterday. We were at the KINK Bing Lounge show of Trigger Hippy, Joan Osborne’s great band with Black Crowes drummer Steve Gorman. Steve is a very old friend of mine and a former roommate. In fact, I played a role getting him into the Crowes when I was Drivin’ N’ Cryin’s manager in 1987. It’s always great to catch up with Steve and the new group is really, really great, like a band I would have wanted to see in 1970.

Joan just fell in love with Cozy and my baby girl has the same birthdate as Steve (so we’re convinced she’s going to be a drummer). I was excited for him to meet her as he’s known my ups and downs for the last 27 years and gave me a lot of great father advice when we were still expecting (before he ran off to hang out with Dave Grohl and Ringo Starr).

So what does a baby get from being backstage at rock gig besides the above picture to brag about when she’s older? Not that much and I don’t want to foster mindless idle worship or encourage some version of groupiedom. (I want you to REALLY listen to the lyrics of “Superstar” by The Carpenters.) However, there is something of value of having friends who are successful musicians.

Most of those people got to do what they love for a living for one reason, a lot of hard work. When I was in high school, I took a folk guitar class and was frustrated that I couldn’t already play like Jimmy Page. I’d think, “I should have started at 10. It’s too late!” And I sort of just quit. If I had just practiced my ass off from 16 to 20, I would have been able to play all those licks for the last 30 years. My friends didn’t quit. I learned a lot from my long conversations with Bono and Susanna Hoffs. I learned about the creative process and what it takes to do it right.

I love the chapter in Malcolm Gladwell’s 2008 book, Outliers, where he compares The Beatles and Bill Gates. Both practiced obsessively at the the thing they loved. He calls it the “10,000 Rule.” You need 10,000 hours of practice before you can really get good at anything. Macklemore wrote a song about it called “10,000 Hours.” I’d like to think I have 10,000 hours of teaching in and I’m working on 10,000 hours of writing now. I know my friends who have put in their time drumming or songwriting can now enjoy the fruits of their labor.

I want Cozy to know that to do the thing you love well takes a lot of commitment. If she wants to play the violin or write speeches or fix refrigerators she needs to go all in. People aren’t born rock stars, they pay their dues. (I will save the required discussion on the evils of American Idol for another time.) And it’s often not very glamorous. You are alone in a room or playing in a tiny club to 4 people who are ignoring you. But you are working your craft. So yes, she will have piano lessons and, unlike me, she won’t quit.

Well, I guess some people are born to be rock stars. Steve Gorman wasn’t the first star she met at a show. Before she was born she met Beatle son Sean Lennon after a great Ghost of a Saber Tooth Tiger show. I’m sure she’ll meet more in the future. (Does Bono baby sit?) And I hope they tell her how you get to Carnegie Hall. Practice. 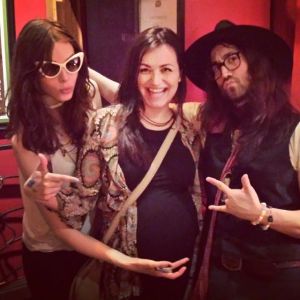 Hanging out with Beatle baby Sean Lennon and Charlotte Kemp Muhl of the GOASTT, Mississippi Studios, May 24, 2014.

The following book was mentioned in this blog and you can buy it from Powell’s by clicking the cover below.

2 thoughts on “You can learn a lot from a rock star.”