This is part of a book I’m writing on men and Western feminism. I’ll be occasionally posting a little bit of history of feminist theory in a way I hope you like. Part 1 is here:

FEMINIST HERSTORY PT. 1 – IT IS DISCOVERED THAT WOMEN ARE PEOPLE!!!

All people are created equal

Feminist thought did not die like Dr. Frankenstein. In fact it ramped up in 19th Century America. People forget that the leading voices for the abolition of slavery were female. It shouldn’t be that surprising that the abolition movement gave birth to the first modern feminist movement. There are important names that came out of this era that you might know from a picture on a coin or an Amy Ray song, but they are important as the Founding Fathers because they helped to liberate not only the enslaved populace, but also half of the “free” citizens.

One of the key voices of the abolitionist movement, Lucretia Mott, is also viewed as the first American feminist by many. Mott was a Quaker from Nantuckett and founder of the Philadelphia Female Anti-Slavery Society. In 1840 she headed off to London to speak at the International Anti-Slavery Convention. But the male abolitionists turned out to be just as sexist as the general population and wouldn’t let the women speak. Mott rallied her supporters and became known as the “Lioness of the Convention.”

Another American abolitionist was in the audience, watching Mott get the short end of the stick; Elizabeth Cady-Stanton. Cady-Stanton was the daughter of a prominent New York attorney who introduced her to the law and her husband was an anti-slavery activist. She met with Mott in London and the two decided to combine forces to speak against the oppression of women and slaves.

For those that think that line in the Declaration of Independence about “all men a created equal” negates the need for any feminist agitation need a little historical footnote. Not only were slaves denied full citizenship, so were women. At no point in the 18th or 19th century did female Americans have a Constitutional right to vote. The belief was that women had the vote through their husbands. Widows, spinsters, and hussies were screwed, but oh well. Women couldn’t inherit wealth or sign contracts or sit on juries or divorce their husbands or wear designer jeans. In reality that “all men are created equal” stuff only referred to white men who owned property. So when Lott and Cady-Stanton got back from London, they were ready to stir some shit up.

Throughout the 1840s female abolitionists, like Mott, Cady-Stanton, and Lucy Stone from Massachusetts, began lobbying for legal rights for women. With the help of male politicians (including Cady-Stanton’s cousin, presidential candidate Gerrit Smith) small changes were made, mostly in Northeastern states. The women wanted to build a larger movement and built towards a convention that would focus on women’s rights and kick the cause into high gear.

The Seneca Falls Convention in July 1848 was really the birthplace of modern feminism. For two days in Seneca Falls, New York, men and women debated the various issues (white) women faced in their struggle to be full citizens. Speakers included Frederick Douglas, the famous abolitionist, who gave an impassioned speech urging the convention to make women’s suffrage a priority. The end result was the Declaration of Sentiments. Modeled after the Declaration of Independence and utilizing the language of the Enlightenment, the Declaration outlined the structural imbalance women suffered at the hands of free men. Sixty-eight women and 32 men signed the Declaration and launched it into the world. The opening paragraphs read:

When, in the course of human events, it becomes necessary for one portion of the family of man to assume among the people of the earth a position different from that which they have hitherto occupied, but one to which the laws of nature and of nature’s God entitle them, a decent respect to the opinions of mankind requires that they should declare the causes that impel them to such a course.

We hold these truths to be self-evident: that all men and women are created equal; that they are endowed by their Creator with certain inalienable rights; that among these are life, liberty, and the pursuit of happiness; that to secure these rights governments are instituted, deriving their just powers from the consent of the governed. Whenever any form of government becomes destructive of these ends, it is the right of those who suffer from it to refuse allegiance to it, and to insist upon the institution of a new government, laying its foundation on such principles, and organizing its powers in such form, as to them shall seem most likely to effect their safety and happiness. 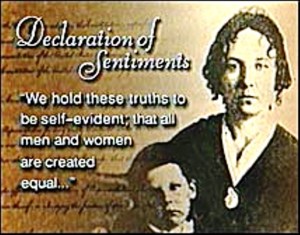 Change wasn’t immediate. A lot of men were scared shitless about giving women the right to vote, let alone any legal equality. As the suffrage movement heated up, a lot of powerful men went into a panic. Turns out there were (and are) more women in the U.S. population and the “majority rules” democracy could be turned upside down. Major newspapers, like the New York Times, began running editorials about the White House becoming the Pink House and wars being replaced with quilting bees if women had voting rights. But Suffragettes, like Susan B. Anthony, the Quaker founder of The Revolution, kept the heat up. Finally, in 1920, the 19th Amendment was passed, and 57 years after the slaves were freed by Lincoln and 124 years after the Declaration of Independence, women were granted full citizenship. The “first wave” feminists had achieved their greatest goal.

A range of other views moved to the front burner. These included birth control for women, the legalization of abortion, equality within marriage, sexual freedom, and the ability of women to escape drunken, abusive husbands. While some women found liberation in the Flapper fad of the 1920s, personified by actors like Clara Bow, once the Depression hit in 1929, the focus moved back towards basic survival. It wouldn’t be until fifteen years after WWII that the Second Wave would appear.