When Betty Friedan published The Feminine Mystique in 1963, illusion of the “happy homemaker” was forever shattered. Women were more than “Mrs. Joe Blow,” finding a sublime happiness in a spotless house with dinner on the table at six sharp. Feminist sociologist Dorothy Smith wrote that women were given the domestic sphere of the home so men could occupy the whole of the public sphere. Suddenly, the word was out and girls and women said, “I’m coming out into the wide word. Time for a little R-E-S-P-E-C-T!” (Forever love to our queen.)

My experience flipping the script and becoming a house husband while my wife went off to work at various Portland law firms revealed some unexpected truths. Expectedly, as Friedan would have predicted, I hate housework. The reality of the that drudgery came rather quickly. But I’ve found a sense of fulfillment out of getting dinner on the table. The thrill of the grocery store hunt for ingredients (“Excuse me. Is pesto a spice?”), the kitchen assembly (while this week’s Spotify Discover Weekly playlist plays behind the Food Network website), and then the ultimate cliffhanger (Will they eat it??). John Lennon once said that, when he became a house husband, preparing a meal that his wife and child actually liked was better than making a hit record. I can totally relate, John. All we are saying is give pasta a chance!

But the other part that has crept in is the intense bond I have built with my child, who turns four today. That moment when we brought her home from the wild ride of her birth, she was just this helpless little blob that looked like my father but acted more like a slug than a member of the family. In those four years she has become a full-fledged person with the world in her sticky palm. Yeah, she’s cute but,  yeah, she knows how to work it. Somehow she picked up on the social lessons of how to work a room. She’s got work to do before she truly understands how to win friends and influence enemies. She’s still fairly id driven – “What can you do for me? That might work for our emotionally stunted president, but we want her to ask, “What can I do for you?” I guess, until then, she’s just half-fledged.

My wife can see the bond between Cozy and I. We have our own secret language (called Kupa Sana) and her weird hand mannerisms are the same as mine. (Sorry, kid.) We fill our days with adventures. This week we spent some time wandering around Lone Fir Cemetery, full of nineteenth century headstones of Oregon pioneers and twenty-first century headstones of Russian immigrants who lived through the rise and fall of the Soviet empire. We talked about life and death and how we can be sad when people die but happy because their memories surround us. “You mean, the spirits of all these dead people are floating around here?” she asked. I was worried that the death conversation would traumatize her, but, instead it gave her a sense of calm. I guessing that’s because she’s half Mexican (and really loved Coco).

A few days later we trucked up to Sauvie Island to pick blackberries on an organic farm. The smoke from the west coast wildfires hung low, but we lost ourselves in rows and rows of sweet berries, learning which ones were sour (“Daddy, this one’s not ready. Can I spit it out?”) and which ones were perfectly sweet. We were in a little cubby hole of fruit, with the occasional tiny green frog crossing our path, laughing and eating more berries than we were putting in the bucket. Her face and hands were purple and I had a moment where I thought she had been sent to me from another dimension to help me connect the real world to the one that exists in dreams. 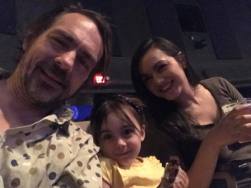 It’s strange having such an intense connection to a child. Andrea is right in that we celebrate Cozy as the intersection of that’s everything that’s right about us. We had to bust through some seriously evil roadblocks just to be a couple. Cozy represents everything that is pure about our desire to be together. Her birthday is a reason to celebrate what a good job we’ve done. But she’s also her own entity that’s full of depth and wonder separate from us. Last night we took Cozy to see a band recreate The Beatles’ Sgt. Peppers’ album and on the first note of the third song she screamed “Lucy in the Sky with Diamonds!” This is my child. I vowed not to be the parent in “She’s Leaving Home” and held her tight.

Each moment of these four years has been a gift. I wonder about the fathers who see the “domestic sphere” as an alien, feminine space. Do they know what they are missing? Do they know the unadulterated thrill of having a child say, “Daddy, you make the best spaghetti ever!” (even when you know that they’ve only had spaghetti made by you). As much as I’m ready to return to full-time public life, this experience has given me a great friend and expanded my soul. I might not know who’s playing in town this weekend, but I know someone who digs nature walks,  old Batman episodes, and endless blackberries, and that’s cool enough for me. Happy birthday, Cozy Pozy.