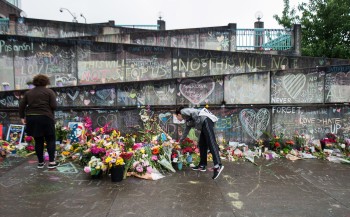 Tuesday afternoon I had just completed one of our weekly civil rights bus tours of Portland. I’m a presenter for the Fair Housing Council of Oregon ride through our state’s tortured racial history. My part of the program is about hate crime that now links the 1988 bludgeoning death of an Ethiopian immigrant by racist skinheads to the brutal attack by an “alt-right” lunatic on a Portland Max train last May. The bus rolls from the street where Mulugeta Seraw was murdered to the Hollywood Max station where three heroes were stabbed for standing up to hate, two of them paying for it with their lives. I try to connect the dots and have yet to do so without choking back the tears.

I end my part of the tour by talking about the difficult work of reaching out to the haters and leading them to the side of love. That that’s where the true justice is. I talk about an organization called Life After Hate, a group of “formers,” who used to be members of white supremacist groups and now do important anti-racism and de-radicalization work. I mention how this group was awarded a $400,000 grant by the Obama Administration that was just rescinded by the Trump Administration. (Gee, why would Trump want to stop the work of a group that drags people out of right-wing hate groups?) And I talk about the 16-year-old girl with the swastika tattoo who, in 1988, handed her skinhead boyfriend the bat used to bash Mulugeta Seraw’s skull in. She’s now one of my most cherished friends. She served her time, befriending an African-American girl she was locked up with, and now speaks powerfully about what sent her down the ugly road of hate.

Tuesday’s tour was for a group of fresh-faced graduate students at Lewis & Clark. Afterwards a young woman approached me and said, “I’m a radical feminist anarchist and I think these people should be attacked, physically attacked.” I tried to explain to her that that approach only pushes them farther into their little Nazi boxes, making them into the victims of another kind of hate. That it makes more sense to try to make a connection with them and bring them to our side. That I’ve been doing this work for almost thirty years and this is the only thing that actually works to reduce the hate and threats of violence. She was having none of it, harumphed, and stormed off.

I’ve been reflecting on that interchange this week. One one hand, I don’t think she understands the concept of “radical feminism.” If you think the appropriate response to a social problem is more macho violence, then you are not a radical feminist. On the other hand, I get it. If someone had knocked the crap out of Jeremy Christian before May 26th, maybe he would have thought twice about opening his hate spewing mouth on a crowded train that afternoon.

And I was thinking about it last night. Andrea and I were celebrating our wedding anniversary at a great new jazz bar in Portland called The Jack London Revue. The Jim Beam was settling into my veins as the Mel Brown Quartet played. I looked at my wife in the dimly lit club and thought of how lucky I am to be her husband. We are a team on multiple fronts: parenting, home-maintaing, creative projects, financial struggles. We’re in this together. And we’re stronger when we come at life as a partners instead of rivals. There are fights, when somebody is convinced they are right. I would love it if she rinsed her plates and I’m sure she would love it if I stopped thinking farts were “funny.” She’s very Antifa on that one. (Anti-Fart)

But there’s another way. I jokingly think of it as “feminist husbandry.” There’s a challenge when we are so committed to our position that there must be a “winner.” My charge is to just stop. Just stop. Lose the ego and remember we’re a team first. My job is to take care of my partner, not win an argument. We can find our common ground. I don’t always do it, though. It’s easy to let the anger win and just want to (like my “radical feminist anarchist” rider) attack. That’s why I’ve put little reminders up in our house. Signs that say,  “appreciate,” “acknowledge,” and “be loving” are taped up on walls. (It’s cheaper than getting them tattooed on my hands.) There is time in life to take a breath and remember what the mission is.

One of my favorite songs growing up was The Byrds’ version of Pete Seeger’s “Turn! Turn! Turn!” The lyrics are actually from the Christian Bible; Ecclesiastes 3. There is a time to fight, but also a time to refrain from fighting. Love wins out over hate. Ultimately, we are all on the same side. That includes the haters and those that hate the haters.

11 thoughts on “A Time to Refrain from Fighting”