When I was little, I know I could look at a three-inch space on the ground or on a brick wall and find a whole world to become enchanted with. My parents had a massive hifi console in our living room. I’d play their records and stare into the blue “On” light on the base and imagine it was the rabbit hole into Alice’s Wonderland. I would plop down in my mom’s rock garden and find magical realms in the cracks and under leafs. Being small gave me a microscopic view of the world I think the adults missed. They were busy thinking about taxes and war and hippies ruining the nation. I was happy staring endlessly at ladybugs and pretending a peanut shell in a puddle was a speedboat.

Once Cozy started walking we began going on strolls in the neighborhood to “see what we could find.” There were lots of stops to smell flowers and look for honeybees. The wall at Little Big Burger she is particularly fond of. (She gives it a little big hug every time we pass it.) Every step is filled with a reason to be amazed. To make it one block it can take an hour. “Daddy, what’s this?”

“It’s a leaf, honey,” Now we include hikes in Forest Park which might as well be the jungles of the Yucatan (where we all were a year ago.) It’s more than father-daughter time. It’s a time to experience the sense of wonder in the mundane. The sacred in the profane. The awesome in the gross.

This summer we’ve been spending a lot of time in our yard. There’s a spider who lives on one of her old boots that we made into a planter. Of course she’s the “Itsy Bitsy” spider of song and legend. There’s a good 30 minutes watching her and the crows on the telephone wire who might want to gobble her up. Our small backyard has a bounty of delicious raspberries, dancing white butterflies, and bees harvesting pollen from our dandelion forrest. “See their legs, Cozy? How yellow they are? They’re going to turn that into honey!”

At her daycare they go on “nature walks.” It’s a gaggle of 2-year-olds strolling through the neighborhood blocks looking for adventure. St. Andrews church is a “castle” they pass by. I’m sure local front yard gardens offer a thousand lessons. It must require a certain abound of zen to get these kids all headed in the same direction. Every step offers an opportunity to freak out over something the rest of us see as insignificant.

When I was a pre-schooler, my parents felt perfectly fine turning me loose into the woods by myself. I would build damns and collect leaves until Mom rang the dinner bell. Times have changed, but Cozy really doesn’t have to leave my sight to find a magical world under a rock or inside a hole in the porch steps. The big world doesn’t have much bearing on the microcosmos for a toddler. 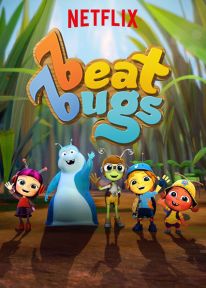 She’s become fascinated with a Netflix show called Beat Bugs. It’s the adventures of five bugs built around Beatles songs. (Yes, they have a friend who is a blackbird.) Their whole world exists in the backyard of a little girl not much older than Cozy. It’s full of music and mystery. Their joyous theme song is “All You Need Is Love.” I have to think Cozy thinks the same plot lines are playing out behind our house. (We’ve certainly got at least one Walter the Slug who is probably singing “I am the Walrus” as we sit here.) I see the show as a way to turn her on to Beatle music, but I’m starting to think it’s her bonding with other tiny things. We’ve been calling her “Bug” for a few years now so it makes sense that she feels more kinship with the ants on our sidewalk than the G-20 Summit.

The world is so big. A one trillion-ton iceberg just broke off of Antarctica. The President is having secret meetings with a Russian dictator (who may or may not have serious dirt on him) with no Americans present. Your kid’s talking doll might be a spy for the FBI. (Or in Trump’s case, the Kremlin.) A new study just found plastic particles in most brands of Mac & Cheese. There’s just a great weight of it all. It makes sense to take some time and find a small crack in the ground, one you step over every day. It’s actually a massive canyon teaming with life. Maybe it’s the Beat Bugs, or maybe real bugs. Let your mind go just for a minute like you did when you were a kid. If the earth is just a dot in the infinite universe, that crack is as important as we are. 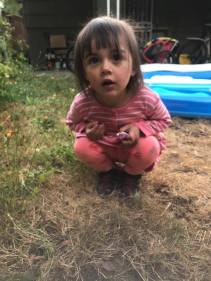 Seeing the world through Cozy’s eyes puts the big picture into perspective. (This blog post didn’t need to be very big.)

One thought on “The World of Wonder in the Backyard”