When I was a teenager in the late-1970s, I wished I had been a teenager in the 1960s, so I could have swum in the countercultural revolution. Of course, I was already in history. It was called the punk rock rebellion, and there are a million kids now who wished they could have been in my shoes, buying Ramones albums (on vinyl!) as they came out. I was just too close to it to see it as a moment in history. It was just my life.

The great sociologist C. Wright Mills argued that for people to start to understand how society works they have to understand their own biographies as history. When we read a biography, we see it as a reflection of the history that was unfolding around that person’s life, whether it’s the biography of George Washington or Judy Garland. My students are reading The Autobiography of Malcolm X this quarter and you can’t view the life of Malcolm Little/Malcolm X/Malik Shabazz outside of the context of the racially oppressive twentieth century. His biography is the history of hi century.

And so is yours. The goal of any individual should be to create a biography that both reflects the times and impacts the times. Live in the moment and shape the moment. You are living history. Most fascinating of all histories is the present. 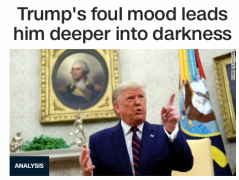 This couldn’t be any truer than right now. This era will be analyzed for centuries. People are still debating whether or not the French Revolution worked. That won’t hold a candle to the late night conversations students, history buffs, and robots will have about the spectacular rise and fall of Donald J. Trump. We are in perhaps the most significant turning point in U.S. history since the test of World War II. This generation may be witnessing the end of the American Century or the birth of a global youth revolution to save the Earth, sparked by a Swedish kid with Aspergers who demonstrates more class and intelligence than our president does on his very best day (which, I know, isn’t saying much).

I cut my political teeth on the Watergate hearings in 1973. I was 9-years-old and watched it with rapt attention. When Nixon named Gerald Ford as his vice-president in 1974, I knew there was a quid pro quo that would lead to Ford’s pardon of Tricky Dick. My first trip to the White House was while Nixon was deciding to bug out instead of enduring impeachment proceedings. I probably could have stolen the china and they would have assumed Pat Nixon was looting the place before their shameful exodus.

It felt like history was happening and it feels that way again. The impeachment of Bill Clinton felt more like politics as usual. Bill’s shenanigan’s definitely sparked a national conversation about what constitutes “sex.” (To future generations, blow jobs are, in fact, sexual relations.) It all unfolded during my disastrous first marriage and I don’t doubt that couples across the country were having uncomfortable conversations about the nature of infidelity thanks to the Oval Office antics of Slick Willy. But it didn’t seem monumental, just sad. This feels monumental.

History is always happening and always has a soundtrack. Yeah, the upheaval of 1968 had the Beatles’ “Revolution” and the Rolling Stones’ “Street Fighting Man,” but you better believe the “look backs” 20 years from now will have Billie Eilish and Lizzo playing along. (“Why men great ’til they gotta be great? Don’t text me, tell it straight to my face.”) This moment in history is framed by news apps, bipartisan divides, and generational warfare. The old white men would rather die guns blazing and burn the house down on their way out than see young women (especially young women of color) even the playing field. Sorry Mitch McConnell, the future of America looks more and more like Alexandria Ocasio-Cortez every day. We’re no longer being handed history by Walter Cronkite on the CBS Evening News, we’re finding it on our phones and Twitter feeds. And we’re sharing the news that the Orange Emperor has no clothes. (Cannot unsee!)

There’s a great 2011 Woody Allen film called Midnight in Paris all about how we over-romanticize the past. It was always better in some previous era. I’ve often thought about how great it would be to live in the Bohemia of 1840’s Paris or 1950’s San Francisco. No doubt the food would suck in both and no wi-fi to boot. The same is true for the Make America Great Again suckers who think the country was better off back in the days of Jim Crow. (Also no wifi.) This is the moment to be in. This crisis. This opportunity for transformation.

I’m committed to taking all this in, every presidential tweet storm, every unhinged Rudy Giuliani interview, every cabinet member indictment, every smirking Stephen Colbert monologue. Future generations will ask us what it was like to witness the compete collapse of America’s mad king. I’ll tell them I LMAO. They’ll have no idea what I’m talking about.

One thought on “Your biography is history: Taking in the Trump impeachment”

Join 2,662 other subscribers
When you have an identity crisis on the beer aisle. #punkrockdad #portland #newseasons #beer
Damn Good Dad